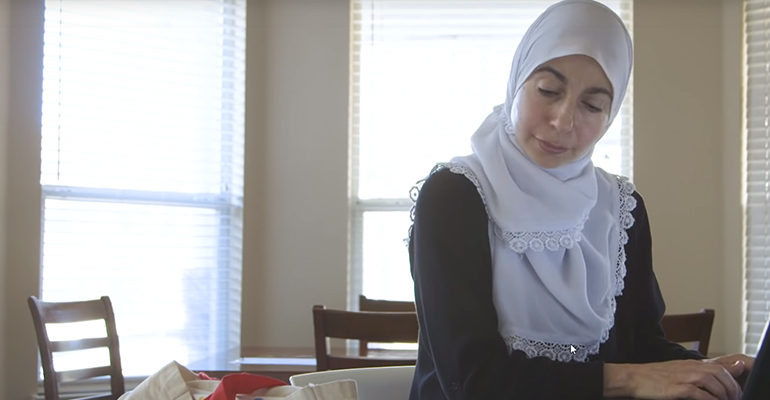 Bahia Amawi worked as children's speech pathologist for the Pflugerville Independent School District in Texas.
Bahia Amawi works as children’s speech pathologist for the Pflugerville Independent School District in Texas. Or, rather, she used to work as a children’s speech pathologist for the district. After nine years, Glenn Greenwald reports at The Intercept, the district’s administration declined to renew her contract because she refused to sign a loyalty oath.
Not a loyalty oath to the United States. Not a loyalty oath to the state of Texas. Not a loyalty oath to the Pflugerville Independent School District, nor to its students.
A loyalty oath to Israel.
Texas is one of 26 states (with similar legislation pending in 13 others) which requires state contractors to certify that they “do not currently boycott Israel” and “will not boycott Israel” for the duration of the contract.
The definition of “boycott” includes “refusing to deal with” or “terminating business activities with” Israel or any “person or entity doing business in Israel or in an Israeli-controlled territory.”
The purpose of these requirements is to hinder the Boycott, Divestment and Sanctions (BDS) movement. BDS participants call on Israel to meet its “obligations under international law” by withdrawing from occupied Palestinian territory and so forth, and back that call by refusing to purchase Israeli goods or do business with Israeli companies.
Agree with BDS or not, it’s entirely proper for people who oppose a government’s actions to adhere to their convictions peacefully, by refusing to trade with that government or with businesses operating in that government’s jurisdiction. One prominent example in living memory was the global boycott of South Africa over apartheid, a system many BDS proponents liken to Israel’s rule in the West Bank and Gaza.
The Texas law theoretically excludes actions “made for ordinary business purposes”, but it’s easy to see how the loyalty oath could be abused:
Two companies or contractors, one from Israel and one not, bid on a job. When the Israeli company doesn’t get the job, it complains that prejudice against Israel, rather than “ordinary business purposes”, motivated the decision. Contractors who do business with governments requiring such loyalty oaths are likely to bend over backward to avoid such complaints.
But such abuse, while worth noting, isn’t the essential evil of such loyalty oath requirements. It’s merely one negative side effect of a kind of law that’s bad in and of itself.
The state of Israel benefits to the tune of billions of dollars per year in U.S. foreign aid. Instead of just gratefully accepting the annual welfare check, its lobbyists have also successfully demanded what amounts to veto power over U.S. foreign policy.
Now those same welfare queen lobbyists want the power to order American businesses and workers — the people from whom that tribute is extracted — to buy from, sell to and hire Israelis whether we like it or not.
You and I — and Bahia Amawi — should be free to do business, or not, with anyone we darn well please, for any reasons we consider relevant. And American politicians should stop trying to impose loyalty oaths of any kind.