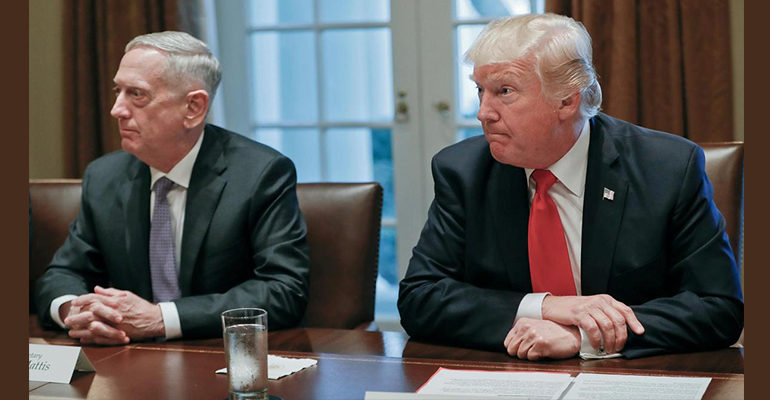 President Trump listens during a briefing with senior military leaders in the Cabinet Room of the White House in Washington, as Defense Secretary Jim Mattis watches. File photo

WASHINGTON — Secretary of Defense Jim Mattis abruptly said he was quitting on Thursday after falling out with President Trump over his foreign policies, one day after Trump rebuffed top advisers and decided to pull all U.S. troops out of Syria.

Mattis announced plans to resign in a candid resignation letter to Trump that laid bare the growing divide between them and implicitly criticized Trump’s disregard for America’s closest allies. He released the letter after a face-to-face meeting with Trump in which the two men also aired their differences, a senior White House official said.

“Because you have a right to a secretary of defense whose views are better aligned with yours on these and other subjects, I believe it is right for me to step down from my position,” Mattis said in the letter.

U.S. officials said the resignation had not been forced by Trump.

Mattis, a retired Marine general whose embrace of NATO and America’s traditional alliances often put him at odds with Trump, had advised against the Syria withdrawal. One official said it was a contributing factor to his resignation. Trump announced on Wednesday that U.S. troops in Syria would be withdrawn.

Trump increasingly acted on his own instincts on a host of national security issues, choosing an “America First” agenda that contradicted Mattis’ core beliefs.

Mattis’ letter indicated that he disagreed with Trump’s isolationist policies, writing that it was his belief the United States needed to maintain strong alliances and show allies respect.

Trump has withdrawn the United States from several international agreements since taking office in January 2017.

The Mattis resignation letter also said that he believed the United States “must be resolute and unambiguous in our approach to those countries whose strategic interests are increasingly in tension with ours.” He identified Russia and China as countries that “want to shape a world consistent with their authoritarian model.”

Trump, announcing Mattis’ departure on Twitter, said he would nominate a successor soon.

“General Jim Mattis will be retiring, with distinction, at the end of February, after having served my administration as secretary of defense for the past two years,” he said.

One possible candidate to replace Mattis as defense chief could be Republican Senator Tom Cotton, long considered a front-runner to eventually take the role.