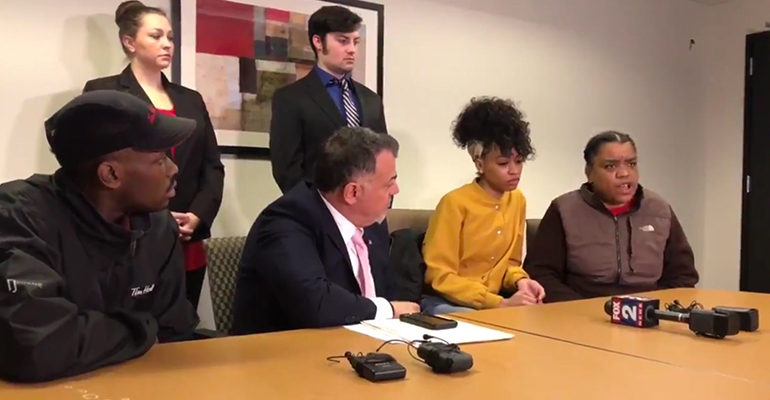 The plaintiffs are Sharneisha Martin, 26, a new employee trainer for four years; John Munningham, 20, a supervisor for three years and Francis Martin, 43 a head baker for 18 years and Sharneisha Martin’s mother. They each allege they were overtly and publicly discriminated against and degraded by management and other employees.

The lawsuit alleges a wide variety of discriminatory practices.

A supervisor allegedly referred to Munningham as “boy” and told him to use his “ni**er strength” to do manual labor. Each of the three employees said they were paid less than lower-ranking, non-Black employees and forced to do the work of non-Black employees without compensation while subjected to racial slurs. The complaint also says that when the three inquired as to why their pay had not increased in conjunction with the increase in Michigan’s minimum wage, they were told by Tim Hortons management that “Tim Hortons does not need to comply with minimum wage laws.”

Sharneisha Martin said she was fired in November after a customer called her an animal, an argument ensued and management did not stick up for her.

“When a customer called me an animal and the manager yelled at me, I said, ‘It’s okay for a customer to call me an animal? And she said yeah, because I’m Black,” Martin said. “It was a horrible experience.”

All three were fired within weeks of each other. They’d been collectively working with Tim Hortons for close to 30 years at multiple locations, starting with the restaurant on Ford Road and Wyoming. They were then transferred to the location at Ford Road and Beech Daly, where they said they faced “outrageous discrimination.”

The complaints were filed with the Equal Employment Opportunity Commission in preparation for a potential lawsuit. Ayad, who hosted a press conference at his Detroit office on Tuesday, said the goal is make Tim Hortons “make right what was wronged.” “It is unfathomable that such overt and blatant discrimination and mistreatment would take place in today’s age,” the press release read. “And Ayad Law, PLLC intends to file a federal lawsuit against Tim Hortons if they are not willing to immediately address these issues by making the needed changes at their restaurants.”

The lawsuit will go forward unless Tim Hortons company leaders are willing to immediately address the issues and change their policies, the three former employees said.

“That was the most degrading place that I have ever worked at, but I had to keep my job because of my family,” Francis Martin said.

“Harassment of any kind is unacceptable and everyone has the right to live and work in environments free from harassment,” Tim Hortons officials said in a statement.

Since the press conference, “a couple more calls” have been fielded by other employees alleging harassment, Ayad said.

“They have a serious problem on their hands and it’s just not an isolated incident,” he said. “The management there just simply does not get it. What we’re calling upon Tim Hortons to do is correct their wrong here. Regardless of what they have to do, sensitivity training, something.

“It’s something you wouldn’t think you would need,” he added, “training for just to treat people with respect and dignity and to not make racial slurs.”