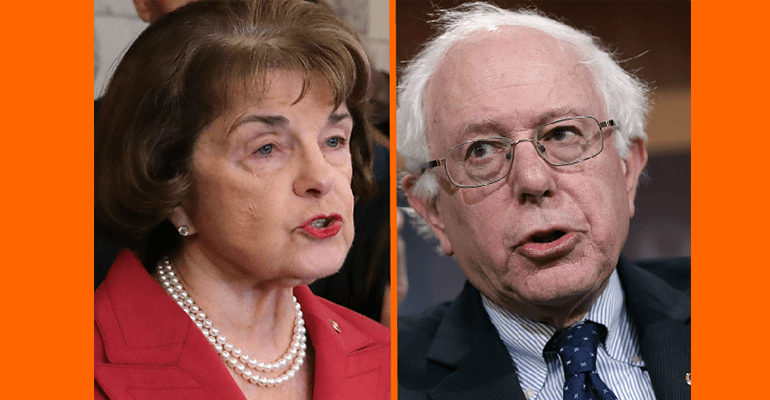 Senators Bernie Sanders (I-VT) and Dianne Feinstein (D-CA) said they're not proponents of the BDS movement personally, but are concerned about the bill as an attack on free speech.

WASHINGTON — The Boycott, Divestment and Sanctions movement (BDS) has been gaining steam over the past several years as activists worldwide have sought to put pressure on an Israeli government that has continuously acted with impunity against Palestinians in occupied territories.

But a pending bill titled the Israel Anti-Boycott Act (S.720), pushed by Sen. Ben Cardin (D-MD), would criminalize those who participate in the movement.

Senators Bernie Sanders (I-VT) and Dianne Feinstein (D-CA) added themselves to a growing chorus of voices, including the ACLU, on Wednesday, announcing their opposition to the bill.

In a letter to the Senate, Sanders and Feinstein said that the measure would “extend U.S. legal protection to the very settlements the United States has opposed as illegitimate and harmful to the cause of Israeli-Palestinian peace for more than 50 years,” according to an article from Haaretz.com. “At a time when the [Israeli Prime Minister Benjamin] Netanyahu government is pursuing policies clearly aimed at foreclosing the two-state solution, it is deeply disappointing that Congress would consider choosing to penalize criticism of those policies,” they added.

While the bill would not include jail time for those in violation, it could still impose criminal financial penalties of up to $1 million according to the ACLU.

Known as two of the most prominent Jewish members in Congress, Sanders and Feinstein said they’re not proponents of the BDS movement personally, but are concerned about the bill as an attack on free speech.

“While we do not support the Boycott, Divestment and Sanctions (BDS) Movement, we remain resolved to our Constitutional oath to defend the right of every American to express their views peacefully without fear of actual punishment by the government,” the letter added.

Courts in Kansas and Arizona have deemed such laws to be unconstitutional.

The two senators “also warned that the legislation will create de-facto American support for the settlements, by punishing American citizens who choose to boycott them.”

“At a time when the Netanyahu government is pursuing policies clearly aimed at foreclosing the two-state solution, it is deeply disappointing that Congress would consider choosing to penalize criticism of those policies,” they wrote.

Omar Shakir, Israel and Palestine director for Human Rights Watch, pointed out that the bill, even as amended, would impose fines on companies, non-profits and their representatives for refusing on human rights grounds to do business in settlements.

“Yet firms operating in Israeli settlements both benefit from and contribute to serious violations of international humanitarian law and human rights law,” he said. “And the bill would mean those acting to end complicity in serious abuses—the only way they can meet their responsibilities under the U.N. Guiding Principles on Business and Human Rights—could find themselves guilty of a crime.”

The bill is still currently pending. To contact your senator about it, call 202-224-3121 or visit www.senate.gov/senators/contact.