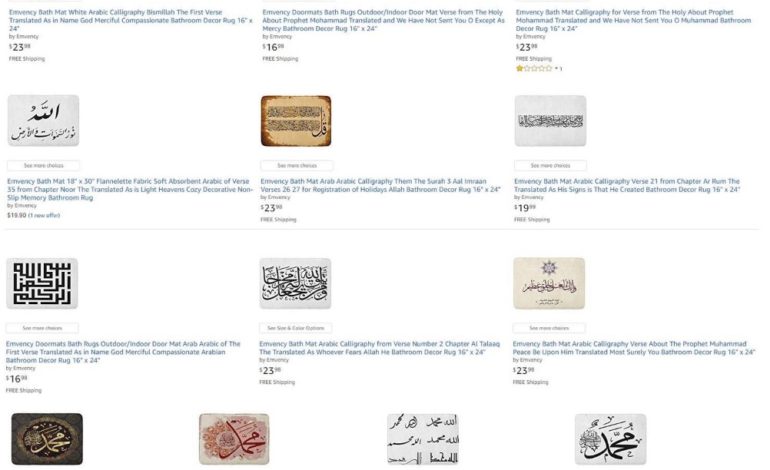 Islamic bath mats and other items were removed

WASHINGTON, D.C. – The nation’s largest Muslim civil rights and advocacy organization, CAIR, welcomed a decision from retailer Amazon to removal numerous doormats, bath mats and other items imprinted with Islamic calligraphy, references to the Prophet Muhammad and verses from the Qu’ran, Islam’s holy book, according to a press release.

The organization received many complaints about the items, which they said are offensive to Muslims because the verses and other Islamic references would be stepped on or otherwise disrespected through their use.

“We thank Amazon for its swift action on this issue and hope it sends a message to manufacturers of such inappropriate and offensive items that they will not profit from Islamophobia or any other form of bigotry,” said Masih Fouladi, executive director of CAIR’s Washington state chapter. Amazon is based in Washington. A spokesperson for Amazon told CAIR that the items have been removed as a violation of the retailer’s policy and that an audit is being conducted for other similarly offensive products.

“CAIR will continue to work with Amazon and other retailers and manufacturers to ensure that products are not exploiting or promoting bigotry for commercial gain,” said CAIR National Executive Director Nihad Awad. “We thank all those who reported these offensive items to CAIR and contacted Amazon.”

Similarly offensive items have been recalled in the past after CAIR’s urging included a Nike shoe with a logo that resembled the Arabic word for “God.”