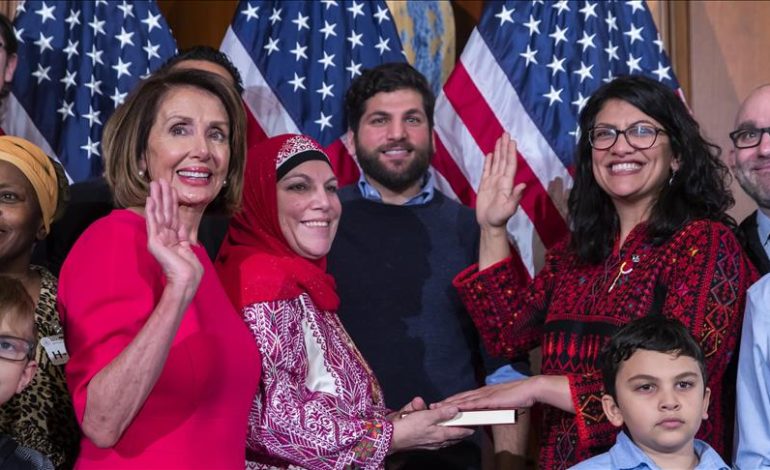 Rashida Tlaib is officially sworn in

WASHINGTON, D.C. — Just hours after being sworn into Congress, U.S. Rep. Rashida Tlaib (D-MI) shook up Capitol Hill by calling for President Trump’s impeachment and repeating an expletive she used against him following her election in November.

The comments were made to a crowd at an event sponsored by MoveOn, a progressive public advocacy organization.

“And when your son looks at you and says, ‘Mama look, you won. Bullies don’t win’, and I said, ‘Baby, they don’t’, because we’re gonna go in there and we’re going to impeach the motherf****r,” Tlaib said.

The video was posted to Twitter by activist Nestor Ruiz of the group United We Dream.

The comments have set off a firestorm of controversy across the political world, with Tlaib doubling down via her Twitter account.

“I will always speak truth to power. #unapologeticallyMe,” she posted on Twitter, later adding in a subsequent post, “This is not just about Donald Trump. This is about all of us. In the face of this constitutional crisis, we must rise.”

She also posted a link to a January 3 Detroit Free Press op-ed she penned along with John Bonifaz, co-founder and president of Free Speech for People.

Democrats now have control of the House of Representatives, which Trump pointed out in additional tweets on Friday morning.

“As I have stated many times, if the Democrats take over the House or Senate, there will be disruption to the financial markets,” he said. “We won the Senate, they won the House. Things will settle down. They only want to impeach me because they know they can’t win in 2020, too much success!”

He also seemed to respond to Tlaib’s comments again in his next tweet.

“How do you impeach a president who has won perhaps the greatest election of all time, done nothing wrong (no collusion with Russia, it was the Dems that colluded), had the most successful first two years of any president, and is the most popular Republican in party history, 93 percent?”

Tlaib sworn in as one of the first Muslim American congresswomen

Tlaib was sworn in as one of the first Muslim American Congresswoman on Thursday, along with her fellow lawmaker, Ilhan Omar, taking her oath by placing her hand on her own personal Qu’ran (not Thomas Jefferson’s copy, as previously reported by the media) in a traditional Palestinian thobe.

Aside from potentially pushing for Trump’s impeachment, Tlaib said she wants to take members of Congress on a visit to the West Bank in Palestine, support a $15 per hour minimum wage, support single payer Medicare for all and fight corporate greed and pollution, according to a report from WXYZ-Detroit.

“I’ve just been tearing up all day looking at some of these pictures,” participant and Baltimore resident Susan Darraj told the New York Times.

“It’s especially moving when you see women wearing thobes that their great-grandmothers made by hand,” she added. “It’s just extraordinary and it’s a visual testament to the relationships between mothers and daughters that we have in our culture; and I think other people can relate to that.”

Watch video footage of Tlaib’s swearing in via Mlive.com below: