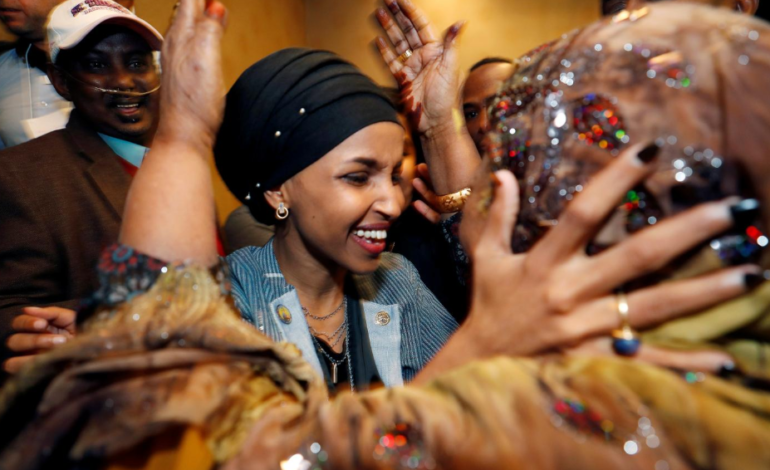 While the soft-spoken Omar did not grab as many headlines as Tlaib did with her comments in the past month, she did usher in a new rule change that will have a dramatic effect on how people view members of Congress, and Muslim women, for years to come.

Omar made history by wearing a hijab on the floor of the House of Representatives, becoming the first woman to do so after a ban on religious head coverings dating back to 1837 was lifted. Omar worked on changing the law after being elected in November.

“No one puts a scarf on my head but me,” she tweeted on November 17. “It’s my choice – one protected by the First Amendment. And this is not the last ban I’m going to work to lift.” The Somali-born former child refugee was sworn in on the Quran by House Speaker Nancy Pelosi while holding Islamic prayer beads, assuming her post as a Democratic representative of the Fifth District of Minnesota, which includes Minneapolis and some of its suburbs.

Afterward, young Muslim men and women from Minnesota, Ohio, and the Washington area gathered to celebrate the occasion in McLean, Virginia, where Omar spoke.

Omar, 37, told the crowd that she plans to fight both President Trump’s “Muslim Travel Ban” as well as the ongoing government shutdown.

“I came from a country under our president’s immigration ban,” she said. “If this was happening 23 years ago, I would not represent all of you in Congress today.”

According to a report from Voice of America, she fought back tears as she spoke.

She said one of her first tasks as a representative in Congress is to fight to end the shutdown.

“I came to Washington when our federal government remains shut down over ‘a silly border wall,’” she said. “I have to join the fight to reopen it.”

Much like Tlaib, she has also been vocally opposed to the Trump administration.

“Donald Trump’s presidency is a national emergency! #TrumpShutdown,” she wrote in a January 9 tweet.

Apart from Omar’s proposed policy shake-ups, her election has a deeper significance for many people of color, immigrants and American Muslims, including those who turned out to support her in Virginia.

“In the Trump era, when anti-immigrant and Muslim rhetoric is high, to witness Ilhan Omar, who shares the same values and background with me, sitting in the Capitol Hill and (celebrating) with her was an amazing moment and inspirational for me,” said 28-year-old supporter, Somali American and journalist Suud Olat to Voice of America.

“Although my parents came from Somalia to this country, I was born and raised here as a Muslim girl; and to see a hijabi Muslim woman like me in Congress is a big reflection,” said 24-year-old Somali American Kowthar Yabarow, who also wears the hijab.