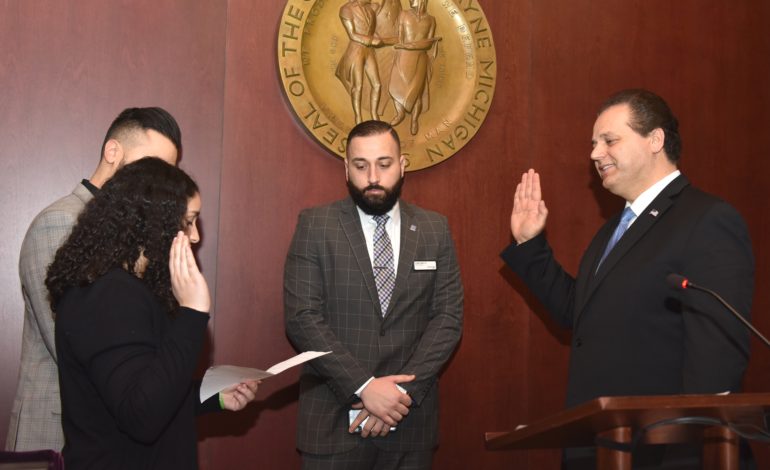 Sam Baydoun (right) is sworn in Sam Baydoun takes the oath as he is sworn in as commissioner.

DETROIT —  Democrat Sam Baydoun of Dearborn was officially sworn in as the 13th District Wayne County Commission representative on Jan. 8, during the commission’s organizational meeting for the new year.

Baydoun, who represents the 13th District, was elected to a two-year term during the Nov. 6 general election and received the oath of office from his daughter Liliana.

He also took the occasion to issue a memorial statement for the Abbas family of Northville, which was tragically killed on Jan. 6 during an accident involving a suspected drunk driver in the Lexington, Kentucky area. In his statement, he talked about his friendship with Issam Abbas and about Rima Abbas’ grandfather, Imam Mohamad Jawad Chirri, who founded the Islamic Center of America in the early 1960s.

“I never thought this would be my first statement as a commissioner,” Baydoun said in continuing his call for tougher drunken driving standards and enforcement.

Baydoun is a longtime Dearborn resident and real estate broker who has served as the chairman of the government affairs committee on the Dearborn Area Board of Realtors. He has been commissioner of the Dearborn Zoning Board and said he hopes to update local infrastructure and build bridges between cities.