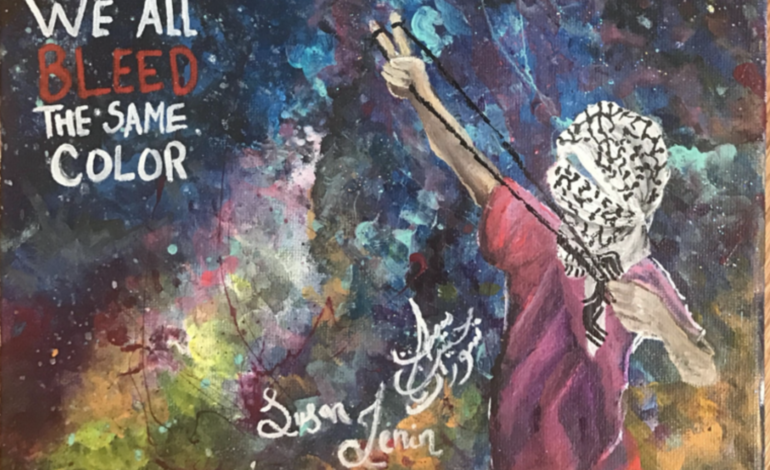 DEARBORN – A Palestinian American immigrant living in Dearborn expresses her passions through her colorful paintings that she said imitate her experiences.

23-year-old Jenin Yaseen said she moved to the United Arab Emirates from Palestine, where she was born, when she was 10. She began studying at Rak International Academy in Dubai, where she gained her interest in art.

“My art teacher saw that there was a huge difference between the quality of my drawing and paintings when it came to Palestine, compared to still-life,” she said. “If I’m painting about something I’m passionate about it’s going to be higher quality than if it was just about anything else.”

She said that teacher at RIA pushed her to get out of her “comfort zone.”

Her paintings, which she said are inspired by surrealism, often feature varied colors and textures. “A lot of surrealism is tied to daydreams,” Yaseen said. “I think they’re how I see the world through my lens. My paintings are really reflective of my experiences either with people or of myself.

“I feel like colors represent emotions,” she added. “Sometimes when I’m feeling something I think of it as a color. When there’s so much color in a painting it’s because I’m trying to convey a certain mood.”

She said sometimes her paintings contain clues to indicate who the painting is about, “so they kind of know that it is about them.”

Yaseen is an accounting and finance major at U of M-Dearborn and is both the vice president of the U of M Students for Justice in Palestine and chair of the U of M Divestment Investigation Committee.

One painting on her Etsy page, where she sells her work online, features a child brandishing a slingshot and the words “we all bleed the same color.”

She said the painting was prompted by Israeli forces arresting 16-year-old Palestinian Ahed Tamimi in December 2017.

“Often Palestinian children who throw rocks in the occupied territories are called terrorists,” she said. “Throwing rocks compared to demolishing homes and using missiles and gas is a misstatement of terrorism.” Only a few of Yaseen’s paintings are up for sale on her Etsy page, but she posts many pictures of her work on Instagram.

She said that even though it’s a cliche, choosing a favorite of her paintings feels like choosing between children; and selling them can be even harder.

“I just haven’t had the heart to sell the newer paintings,” she said. “Each one has a piece of my soul and a reflective of my life experiences. So it’s really hard to give that away.”

Yaseen said she’s sold more than 100 paintings overall, but keeps most of them to herself. “I still kind of tear up thinking about it,” she added. “I’m still learning to heal from it.”

She said a painting she’s working on currently represents the pressure she feels from her community to settle down.

The painting is called “Not Gonna Marry Your Son.”

“It’s a woman wearing a traditional Palestinian thobe throwing away a pot of traditional Arabic coffee,” Yaseen said. “Usually in Arab culture when a potential suitor comes, your parents and his parents are there. Basically, the girl is walking away from that. Their facial expressions are completely stunned by her walking away.

“I say as a joke I’m kind of near my expiration date,” she added. “In Palestinian culture usually women are married by the age of 25. I’m getting near that and with that I feel a little pressure from my mother.”

She added that other family members joke that she needs to meet men and to try to get married before then.

“I didn’t have an experience where I actually stood up in the middle of a man trying to ask for my hand, but sometimes when I get jokes or my mom says something about me getting married, I think of [the scene] in my head,” she said.

Yaseen describes herself as very outspoken, especially when it comes to speaking out for marginalized communities.

“I often find myself in the midst of rumors that are attempting to belittle me and take away any source of value or impact I try to make,” she said.

Yaseen’s work will be on exhibit at the Arab American National Museum’s Annex during Palestinian Culture Night by the Palestinian Youth Movement on April 14, from  6 p.m. to 10 p.m.

Her work can be purchased on Etsy at www.etsy.com/shop/SusanJenin or seen at www.instagram.com/knafeh_