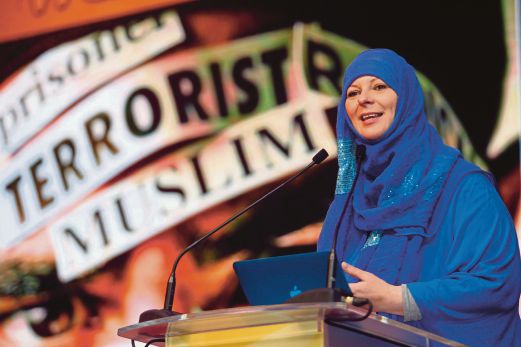 Lauren Booth author, journalist and recent Muslim convert, announced Wednesday an initiative to turn her memoir, “Finding Peace in the Holy Land”, into a stage play.

In an interview with The AANews, Booth, originally from Great Britain, said she converted to Islam in 2010.

She said she didn’t lose her faith in Jesus, but that it was strengthened by her realizations during her visit to Palestine in 2008 while working as a journalist.

“I went looking for Jesus and I found Muhammad through the actions of the people,” she said. “The truth that I found when I was looking for political truth was that I knew nothing. I didn’t know about the Middle East, I didn’t have a full concept of who was occupying whom and I was scared of Arab people.” Booth describes her memoir, which she released in November, as “a series of interlocked stories” that she hopes are a “message, realization or question” for the reader.

She said she didn’t want to make the story just about herself.

“I’m a servant of God, a mother and everyday person,” she said.

Booth also said she wanted to “write it with the purpose of helping to amplify the Palestinian struggle and their voice, and amplifying the struggle of the Muslims to maintain a decent way of life in the West without persecution.”

Being a White person and “part of the mainstream,” Booth said she doesn’t experience as much discrimination as she sees Arab Muslims endure.

“It’s quite easy for me to sort of float about,” she said. “But I’ve definitely felt prejudice and dislike. There’s definitely been a recognition of a lot of aggression when it comes to people asking about faith.”

She said she thinks people of other religions are respected more often than Muslims are.

“We Muslims are asked, ‘Do you believe in stoning people? Why are you wearing your hijab? Get that off your head,’” she said.

She said members of the Islamic community have been nothing but welcoming to her since she’s converted.

“I was never looking to convert,” she said. “I had my faith; God was in his heavens a long way away and I didn’t feel I needed to stay on any right track. I just loved him and knew he was benevolent.”

Booth said when she visited Gaza in 2008 during Ramadan she felt immense peace she didn’t have in her life before.

She said the selfless way refugees there treated her during the month of Ramadan made her “heart burst open.”

“What I saw over there was a mass incarceration, a mass enforced exodus of people over a long period of time,” she added. “I saw extreme persecution of children and deliberately man-made disasters.”

Almost 90 percent of the drinking water in Gaza exceeds the maximum salinity standard, according to the World Health Organization.

Poor maintenance of Gaza’s sewage system seeping into the aquifer that supplies Gaza’s water has caused build ups of chloride or nitrates in 97 percent of water supplied to residents.

“We need to talk about the poisoning of water and the complete and utter destruction of the environment in Gaza,” Booth said. “This is man-made by Israel, it’s deliberate. It’s a war crime. And what are we doing about it?”

She said she’s had a positive response from readers across the board, from Christians, Muslims and atheists.

“People love the journey,” she said. “We’re in a story-telling frame of mind now. One thing this social media moment has given us back is the ability to and the wish to take part in each other’s live as a story, rather than a component or a business deal. This is a human story.” Lauren Booth with her father, actor Tony Booth, at a Labour Party Conference in the 1990s.

As a journalist since 1997 Booth has written for CNN, Al Jazeera, the Daily Mail and many other publications.

She originally studied to be an actress and will return to theater, for the first time in about 25 years, with the upcoming development of the play version of “Finding Peace in the Holy Land.”

Booth started a campaign on Launchgood to fund bringing the book to the stage, which can be found at www.launchgood.com/project/our_faith_in_the_public_space.

She hopes to start performances of the play at the Edinburgh Festival Fringe in August.

“The time of entertainment and seeking out storytellers is growing,” she said. “To go on the stage where people are really engaged with big ideas, and their hearts and minds are open, that’s something Muslims don’t do, and I’m going to, God willing.”

“Finding Peace in the Holy Land” can be purchased on Amazon.