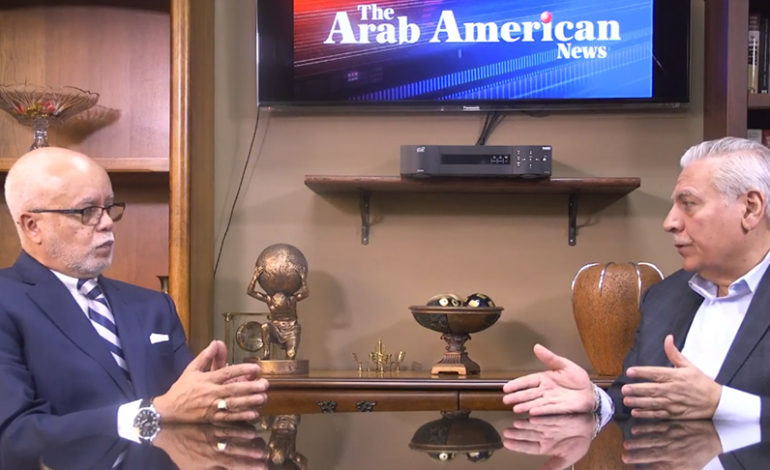 DEARBORN — With more than 1.7 million people represented as of 2017, Wayne County is the largest in Michigan, and the man in charge of overseeing it all is Warren Evans.

Evans was re-elected to the county’s top position in November and has used his platform to focus on a wide variety of tasks ranging from quality of life to diversity, infrastructure and more.

He also got married in a small private ceremony to Renata Seals McCord of Detroit last year.

Perhaps his biggest accomplishment during his time in office, however, has been in the financial arena. Evans has successfully spearheaded the county’s turnaround to a financial surplus after facing and eliminating a massive structural deficit of $52 million.

An $82 million accumulated deficit was also eliminated, leading up to his election last year.

Evans recounted his administration’s turnaround in an interview with The Arab American News Publisher Osama Siblani, which was posted on Facebook this past Thursday.

“We did two things absolutely correctly,” Evans said. “One was I reached out and got a staff I could believe in. There were no parameters on staff, I just looked for good people.”

The former Wayne County sheriff also looked outside the county for help in fixing its dire financial situation.

“The second thing I did was I gave (Oakland County Executive) L. Brooks Patterson a call,” he said. “He has a financial guy over there named Bob Daddow; I said Bob, I need you to come really look a the county’s books. I want another eye to look and analyze what the debt (really) is.”

Known as Oakland County’s financial wiz, Daddow helped Evans and his team gain a clear understanding of what needed to be done.

“Detroit was just coming out of a bankruptcy (and) the main thing was I wanted to know just how bad it was so I could be honest with people about what to do to fix it,” Evans said.

Evans discusses how the county’s deficit was reversed

After the initial steps of getting a clear road map of the county’s financial challenges, Evans began putting his plan in motion.

When asked by Siblani how the county was able to avoid bankruptcy, Evans discussed making difficult but necessary changes.

“We had to reduce or modify pension plans, first of all,” he said. “We (also) had to modify health care, but with the idea that we were not taking anything away.

“We may have a copay that’s a little higher, but we were committed to not stripping our employees of the very livelihood that you’d see coming out of Detroit’s bankruptcy issue.”

It wasn’t easy, but it paid off in the end.

“We knew there were some concessions to be made and that would save money to pay down the debt,” Evans said.

Identifying which properties in the county were necessary and which could be sold also helped.

“The county kind of just hoarded properties,” he said. “Some of the buildings were 30 percent occupied and had ridiculous electrical costs.”

“Zenna was really critical (in leading the financial turnaround) because she was a carryover from the previous administration,” Evans said, calling her a “great lawyer” but more importantly a “great manager” of several different key projects.

Other Arab Americans in the administration include Khalil Rahal, an assistant county executive under Evans who focuses on repurposing underused or vacant county-owned properties and structural issues, and Zeinab Hussein, Wayne County’s director of diversity and inclusion and constituent affairs.

Attorney Nabih Ayad was also recently elected as the chairman of the Wayne County Airport Authority by his peers, a decision Evans said he would have made if he were on the board.

“I’m glad to have those members of the community there because I’m always looking for strong people with talent,” Evans said in the interview, which can be seen on The Arab Americans News Facebook page or below.

“The reality is if you look far enough and you’re diverse enough, you’re going to find strong people in all communities; and people that have blinders on that and don’t see the value in assessing talent in communities other than their own are just missing out.”

A sit down with Wayne County Executive Warren Evans as he takes on a second term. Review of the past four years and looking ahead for the future.

Episode 2- Part 2:A sit down with Wayne County Executive Warren Evans as he takes on a second term. Review of the past four years and looking ahead for the future.

Posted by The Arab American News on Wednesday, January 23, 2019