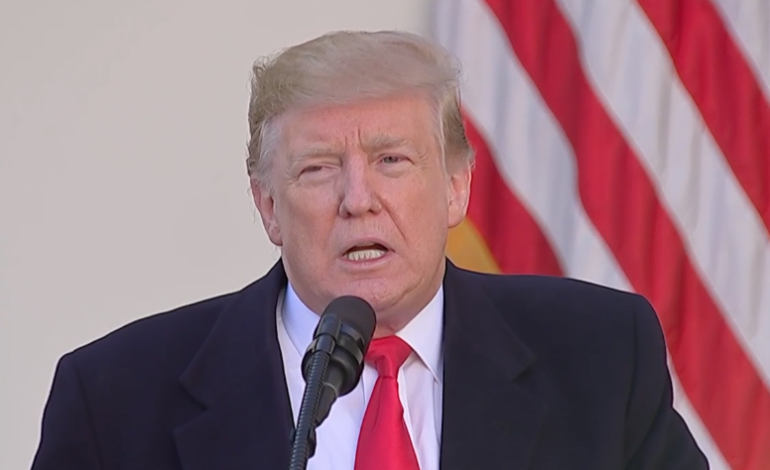 WASHINGTON —After 35 days, the United States government shutdown of 2018-2019 has finally come to a halt, for the next three weeks at least.

The announcement was made by President Trump on Friday, ending the record-setting shutdown and allowing government employees to head back to work.

Trump said that the new legislation will reopen government departments for three weeks, until February 15.

Since the shutdown began, about 800,000 federal workers been forced to work without pay or unable to work, in large part because of a disagreement over billions of dollars Trump demanded in order to build a U.S.-Mexico border wall.

“President Trump has finally agreed to end the shutdown he created and that is a victory for federal workers and the American people,” said Democratic Senator Bob Casey in a statement.

“It should not have taken 36 days of pain to our Nation’s workers and families for President Trump to accept the same agreement that was on the table when the shutdown began. Now with the government about to reopen, Democrats and Republicans can discuss ways to effectively secure the border instead of building a wall that security experts say won’t work.”

“I am glad the government is reopening and 800,000 federal employees are getting paid,” he said.

“Over the next three weeks, the president and Congress will have an opportunity to craft a workable solution. As I have said all along, the obvious, necessary resolution is a compromise that improves border security – including physical barriers where they make sense – and delivers on some Democrat priorities, too. I hope Democrats, who promised to negotiate in good faith if the government were open, will now compromise with the president so the country can put this frustrating episode behind us.”

Trump will not receive any new funding for the wall as a result of the concession.

“In a short while, I will sign a bill to reopen the government for three weeks, until Feb. 15,” Trump said at the White House Rose Garden. “I will make sure that all employees receive their back pay very quickly or as soon as possible.”

But he also doubled down on his request for a large-scale physical barrier on the U.S.-Mexico border, saying that the government will shut down again on Feb. 15 unless he receives funding for a “powerful wall or steel barrier.”