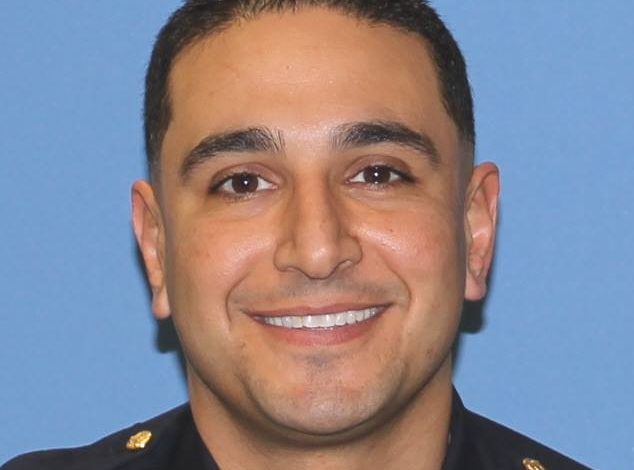 Officer Rafeh took the oath of the academy in June 2010 and served the residents of the Fifth Precinct his entire career. He worked first in patrol, primarily in Patchogue and Bellport, and then as an investigator in the crime section as of October 2017.

He also served as an Arabic translator.

“He was a very bright, hard-working individual,” Fifth Precinct Lieutenant Joseph Terry said. “He worked well with his peers and everybody respected him.”

According to colleagues in the Fifth Precinct, Rafeh, a 1999 graduate of Longwood High School, was never without a smile on his face and was always looking for ways to build camaraderie among the officers. Several recounted his efforts organizing group trips to baseball and football games.

In November, when a group from the precinct planned a football trip to Charlotte, North Carolina and found out Rafeh could not go, Officer Patrick Ryan said Rafeh was so well-regarded by his friends and colleagues that they all instantly changed their trip to another weekend so he could attend.

“We changed our plans because he is the type of guy that can walk into a room and just bring the energy,” Ryan said. “He was a great guy all around. I have only known him here but I already feel like he was a little brother to me—He was just a very intelligent guy.”

“We are all shocked and saddened by this loss,” said Rafeh’s partner, Dan Hogan. “He was a great partner and an even better friend. He will be greatly missed.”

“The untimely passing of Police Officer Fadi Rafeh is an unbelievably tragic loss to his young family and an incredible loss to our police family,” said Suffolk County Police Chief of Department Stuart Cameron. “Fadi Rafeh exemplified the diversity that makes our department great, having been born of Lebanese immigrants and serving as an Arabic translator for our department. I ask the public to join the members of our department in keeping his family in their thoughts and prayers.”

“It is never easy to lose a member of the department,” said Suffolk County Police Commissioner Geraldine Hart. “Officer Rafeh’s death is especially difficult because he had so much to offer to the men and women he served with and was making a difference in the lives of Suffolk County residents. Officer Rafeh will be remembered for his dedication to the SCPD. Our thoughts are with his wife, two boys and his family and friends.”