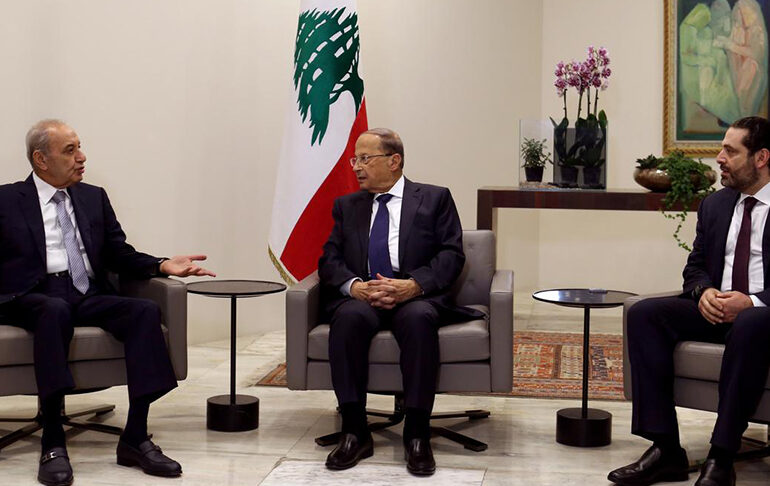 This cabinet of Hariri, who has Western backing, includes most parties including the Hezbollah Party, which emerged stronger from the parliamentary election last May thanks to gains by its allies. Hezbollah was given the minister of health post.

Some Lebanese bond prices jumped to their highest level since August in response to the formation of the new government, and celebratory fireworks burst over Beirut shortly after the deal was announced.

Hariri must now deliver on promises to rein in public spending to address the dire state finances with reforms that could unlock billions of dollars in pledged aid and loans for infrastructure investment.

In a statement read from the presidential palace in Baabda, Hariri apologized to the people of Lebanon for the time it had taken to form the government and noted that the Lebanese people were “living in concern” over the economy.

The time for “painkillers” was over, he said. “No one can put their head in the sand any more … All the problems are known and the causes of the corruption and waste and administrative deficiency are also known,” he said.

“The solution is with a clear program and bold reforms … and developing laws that cannot be delayed.”

Earlier on Thursday he said the new government would be forced to “take difficult decisions” to reduce spending.

Concerns have grown over the state of the economy and government finances. Finance Minister Ali Hassan Khalil — who retained his post — warned last month that Lebanon was in an economic crisis that has “started to turn into a financial one.”

Lebanon’s public debt is one of the highest in the world set against the size of its economy, and it has suffered low growth for years for reasons including regional turmoil.

Gebran Bassil, a political ally of Hezbollah who is the son-in-law of President Michel Aoun and leads the political party he founded, remained foreign minister.

Hariri nominated Rayya Hassan, a former finance minister, to the post of interior minister. She is one of four women in this cabinet, compared with only one in the last cabinet.

While not a Hezbollah member, Health Minister Jamil Jabak’s appointment has been seen as a signal of its determination to exercise more direct sway over government after playing marginal roles in past cabinets.

The ministry has the fourth-biggest budget in the state.

Hezbollah, together with groups and individuals that support its political position and military role as a national resistance, won more than 70 of parliament’s 128 seats in the May election.

Hariri lost more than a third of his lawmakers, but kept his status as the leading Sunni and so returns as premier for the third time. The post is reserved for his sect under Lebanon’s sectarian system of rule.

The last big hurdle was a dispute over how Hezbollah’s Sunni allies should be represented in the new cabinet, resolved by the inclusion of Hassan Mrad, the son of the pro-Hezbollah and pro-Damascus MP Abdul Rahim Mrad.