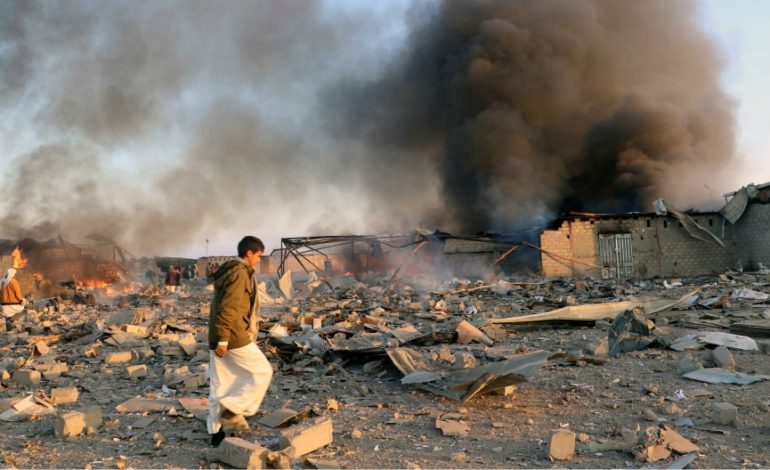 WASHINGTON — A bipartisan group of U.S. lawmakers is expected to seek an end to U.S. support for the Saudi-led coalition in Yemen, a report from Reuters said, with a greater chance of success than a similar attempt that passed the Senate in December.

The measure is being led by Republican Senator Mike Lee of Utah, Democratic Senator Chris Murphy of Connecticut and Independent senator Bernie Sanders of Vermont, who caucuses with the Democrats, as well as Democratic representatives Ro Khanna of California and Mark Pocan of Wisconsin.

The group held a press conference on Wednesday to make the announcement.

“Today we are coming together to address one of the great humanitarian crises facing the planet and also in a historical way to make certain that that the United States Congress reasserts its Constitutional responsibilities in terms of war making,” Sanders said at the conference. “The United States should not be supporting a catastrophic war led by a despotic Saudi regime with a dangerous and irresponsible military policy.”

Last month’s measure passed by a 56-41 vote in the Senate, but a threat of veto from President Trump and a decision by the sitting Republican majority not to vote in the House prior to the end of the year prevented its passing.

Democrats now have a majority in the House, but an uphill battle awaits. The measure would need a two-thirds majority in both houses of Congress to overcome a Trump veto.

The original resolution was fueled by anger over civilian deaths in Yemen from Saudi Arabian strikes, as well as the killing of Saudi journalist Jamal Khashoggi at a Saudi consulate in Turkey.

According to the Reuters report, it was the first time either chamber of Congress had backed a resolution to withdraw U.S. forces from a military mission under the War Powers Act, which was passed in 1973 and limits the president’s ability to order such missions without acquiring approval from Congress first.

“This will be the first time in the history of this country since 1973 that we will successfully pass a war powers resolution through the Senate and through the House,” Khanna said at a Wednesday press conference.

The report added that opponents of the resolution are reluctant to disrupt the strategic U.S. relationship with Saudi Arabia, which is seen as a counterbalance to Iran’s power and influence in the region.

Airstrikes from Saudi Arabia have been blamed for the majority of thousands of civilian deaths in Yemen, which has led to increased threat of famine for half of the country’s population and a cholera outbreak.

Republican ex-lawmakers back Biden on first day of Trump convention