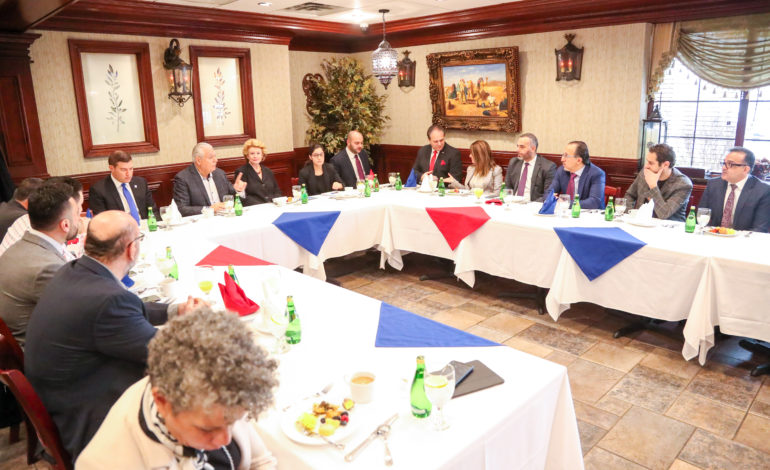 The act, which has been condemned by civil rights organizations including the ACLU for its “McCarthy-era tactics”, would empower states to punish people and companies who boycott Israel to protest its occupation of Palestinian territories.

It officially passed this week by a vote of 77-23 as Israel moved to build a new separation wall in the beleaguered and occupied Gaza Strip.

“Debbie, I wanted to make sure we had a conversation on this as soon as possible,” said The AANews Publisher Osama Siblani, who asked the senator to explain her decision to vote for the bill, which critics point out infringes on Americans’ First Amendment right to protest.

Stabenow began by discussing initiatives of interest to the Arab American and Muslim communities, including her work last week on a bill to ban President Trump’s infamous travel ban on Muslim-majority countries and an initiative for Palestinian entrepreneurs.

She also noted that Senator Mitch McConnell (R-KY), the senate majority leader, decided to bring the bill to a vote.

“He did it precisely to be divisive with Democrats,” she said.

Stabenow added that the bill includes strengthening sanctions on those who support torture against civilians; continuing a strategic partnership with Jordan (and Israel); opposing an immediate withdrawal from Syria without protecting citizens from ISIS and the BDS portion.

“I chose to proceed and then to work with Senator (Gary) Peters on three amendments,” Stabenow said. “We have to clarify or take out provisions on the BDS part of it.

“I don’t know if that’s going to be successful or not,” she added. “He and I had a different view strategically to proceed.”

She noted that the Michigan legislature has already almost unanimously passed anti-BDS bills that have not led to any known actions within the state as of yet.

Stabenow said that she believed that four of the five parts of the bill were the “right thing to do”, adding that she heard from the Syrian community on two of the issues, but also said that the issue is an “emotional” one because of divisive racial and religious tensions that have arisen from the Trump presidency.

Siblani said that the BDS movement is a “way of life around the world” that must be protected, noting how boycotting the apartheid South African regime and anti-African American forces during the Civil Rights movement led to social change.

“I mean we can boycott GM for God’s sake,” he said. “We can boycott Ford. How come we cannot boycott Israel? It’s the right of the American people…This is really going to hurt the Jewish community and the United States, and going to be an infringement on our civil rights.”

“I think, with all sincerity and respect, you’re in a very difficult spot and I appreciate that,” he said. “But this bill, senator, is so fundamentally wrong on so may levels that I can’t tell you, it’s not just an Arab thing or a Muslim bill.

“We know politics are at play, there always is,” he added. “Again, this bill is so fundamentally wrong and stands against what we believe as Americans; at the end of the day in the court of law this will fail, it will not stand.”

Assad Turfe, chief of staff to Wayne County Executive Warren Evans, told Stabenow that both of his grandmothers and his aunt were killed by Israeli attacks on Lebanon and that he should be able to protest against Israel, especially since it’s his right as an American.

State Rep. Hammoud said after the meeting that he was appreciative of Stabenow taking time to meet with the contingent, but disappointed in her lack of action.

“When I spoke to her, I told her that I know her to be a senator that opposes border walls, as she opposed Trump’s funding for one,” he said. “So I wanted her to fight for my right to protest a country that has a border wall, that utilizes a separation wall.”

Hammoud also noted that Israel’s system of segregation against Palestinians includes the busing system, housing system and more, and expressed his frustration with Stabenow preventing Americans from protesting against such a system.

“It’s extremely disappointing that she is willing to infringe on Americans’ right to freedom of speech and right to protest,” he said. “I told her it was a slippery slope and that she needs to stand up for Americans’ rights.”

Click here for the roll call vote for the bill.