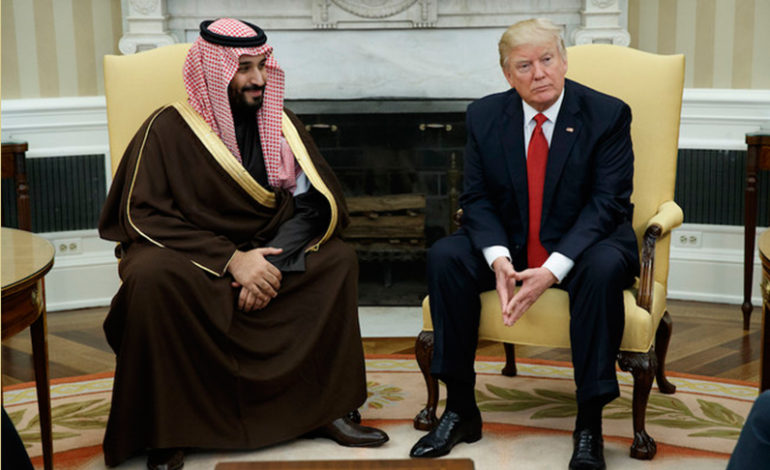 Saudi Crown Prince Mohammed bin Salman during his meeting with President Trump in the Oval Office of the White House in Washington. - File photo

WASHINGTON, DC — Republican and Democratic U.S. lawmakers renewed their push on Thursday to penalize Saudi Arabia for the murder of Saudi journalist Jamal Khashoggi and address the humanitarian crisis in Yemen, introducing legislation to bar some arms sales and impose sanctions on those responsible for his death.

Congressional aides said they had been given no indication that the administration would meet that deadline. The White House did not immediately respond to a request for comment.

Meanwhile, a United Nations-led inquiry into the Khashoggi’s murder said on Thursday that evidence pointed to a brutal crime “planned and perpetrated” by Saudi officials.

Among other things, the “Saudi Arabia Accountability and Yemen Act of 2019” would impose mandatory sanctions on anyone found responsible for the death of Khashoggi, a U.S. resident and columnist for the Washington Post.

Menendez, Graham and other lawmakers had tried to pass similar legislation last year, during the previous Congress, but it failed to advance. The Senate did unanimously pass a resolution blaming bin Salman for Khashoggi’s killing and a measure that would have barred U.S. support for the Saudi-led coalition waging war in Yemen.

However, the Republicans who then led the House of Representatives did not allow a vote on the legislation.

Trump has resisted legislative efforts to rebuke the Saudis, pointing to weapons sales as an important source of U.S. jobs. His administration is also reluctant to disturb the strategic relationship with the kingdom, seen as an important regional counterbalance to Iran, arch-rival of U.S. ally Israel. A demonstrator holds a poster with a picture of Saudi journalist Jamal Khashoggi outside the Saudi Arabia consulate in Istanbul, Turkey October 25, 2018. REUTERS/File Photo

Graham, a close Trump ally who nonetheless has led the push for a strong response to Saudi Arabia, said he expected strong bipartisan support for “serious sanctions.”

“While Saudi Arabia is a strategic ally, the behavior of the Crown Prince – in multiple ways – has shown disrespect for the relationship and made him, in my view, beyond toxic,” Graham said in a statement.

“I fully realize we have to deal with bad actors and imperfect situations on the international stage,” Graham added. “However, when we lose our moral voice, we lose our strongest asset.”

Democrats now control the House and have been more open to legislation penalizing Saudi Arabia. The chairman of the House Foreign Affairs Committee held a hearing on relations with Saudi Arabia on Wednesday, where he opened the door to new restrictions on weapons exports to the kingdom.

Besides putting new limits on weapons sales, the Senate legislation announced on Thursday that it would bar U.S. refueling of aircraft for the Saudi-led coalition engaged in the civil war in Yemen.

It would also impose sanctions on anyone blocking humanitarian assistance in Yemen, sanction anyone supporting the Iran-backed Houthi rebels fighting Yemen’s internationally recognized government, demand “an accountability report” for anyone involved in the Yemen conflict who commits war crimes and mandate a report on human rights in Saudi Arabia.

“Seeing as the Trump administration has no intention of insisting on full accountability for Mr. Khashoggi’s murderers, it is time for Congress to step in and impose real consequences to fundamentally reexamine our relationship with the Kingdom of Saudi Arabia and with the Saudi-led coalition in Yemen,” Menendez, the top Democrat on the Senate Foreign Relations Committee, said in a statement.