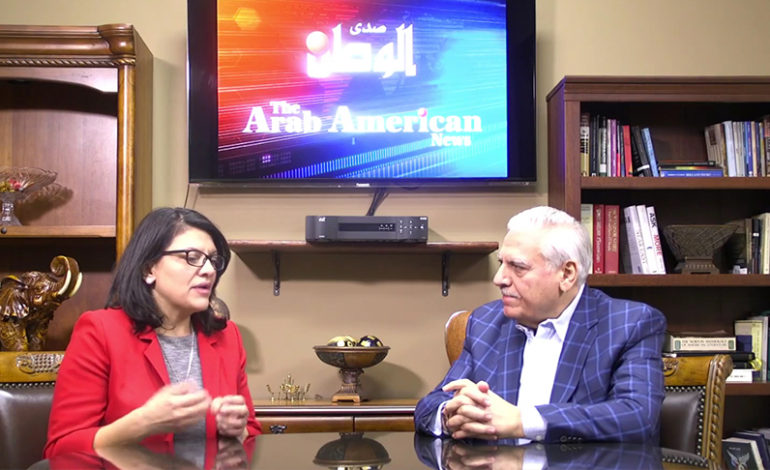 DEARBORN — U.S. Rep. Rashida Tlaib (D-Detroit), sat down with The Arab American News on Saturday, Feb. 2 to discuss her first month in office and her explicit remarks in November about impeaching President Trump.

She said she faced criticisms, received hate mail and a death threat before making the remarks and during her campaign.

“The storm has been coming,” she said. “It encourages a lot of violence and hate towards people of the Muslim faith. That was there even when I was running.”

Tlaib cleared up what she called a “misunderstanding” that she said the explicative in front of her children.

“I’m not always going to be that polished politician,” she said. “I am a person who is very proud of who I am. A lot of who I am is that fact that I’m very direct, sometimes very unapologetic about holding people accountable.”

Tlaib said that directness applied to Arab Americans business owners in her own community when she faced pressures from people who wanted her to support her community.

“If you’re not following the law I’m going to go after you,” she said.

She said she felt like constituents in her district feel proud of her statement. U.S. Rep. Rashida Tlaib speaking during an interview with The Arab American News on Saturday, Feb. 2. -Photo by The AANews

“I didn’t run to be the first of anything,” Tlaib said. “I ran because I really don’t like bullies; I don’t like when the corporate assault on our families continues be unchecked.”

Tlaib said she thinks people knew she ran with the intention of attempting to impeach President Trump.

“This is where the impeachment process can begin,” she said. “I always tell people, think of law and order. The first part of the show is the investigation process and you take all that information and you send it to the courts. And in this case we send it to the senate to basically be able to impeach this president.”

Tlaib told The AANews she thinks grounds for impeachment have nothing to do with the Mueller investigation, but instead are based on what she says are “conflicts of interest.”

“My articles of impeachment are going to be solely based on the fact that in the Constitution there’s a clause that states any sitting president of the United States has to completely divest from their foreign or domestic investments,” she said.

“The Trump organization is still being run by this president,” Tlaib added. “It creates conflict. They know this is a part-time gig and they’re not going to be there forever.

“We have no idea what his investments are,” she added. “This is more than about Russia. We don’t want a CEO basically in the White House running his businesses. He’s not making decisions on the best interests of the American people but the best interest of his corporation. And that conflict is dangerous.” Tlaib said Trump’s presence in the White House could lead to more CEOs and business people with conflicts of interest running for office.

She also said three other members of Congress have filed articles of impeachment.

Tlaib said she doesn’t think her filing for impeachment is premature and that the action “opens up the books” to start a conversation about the issue.

Many have criticized Tlaib as being anti-Semitic for her position in support of the Boycott Divestment and Sanctions movement, which calls for withdrawing support for Israel and Israeli companies.

“It’s very painful to be called basically a racist,” she said. “I served in the [state] legislature for six years. I’ve been an activist for most of my life, right out of college. I have never supported any form of hate. I’m for justice and human rights.”

She said she supports the rights of student organizations and individuals who choose to economically boycott Israel.

“So much of our history and so much of what we do as freedom of speech is through economic boycott,” she said.

“I decided to be with my residents,” she said.

Tlaib said she hasn’t yet picked a presidential candidate for endorsement, stating her focus is on starting four community service centers in her district, one of which opened in River Rouge last week.

She said it’s important to her that candidates’ campaign financial reports aren’t “filled with corporate PACs.

“I need to be the watchdog for my residents who may not know how to go to those reports,” she said, “to tell them I just want you to know that 20 percent of this person’s campaign donations come from this industry.”