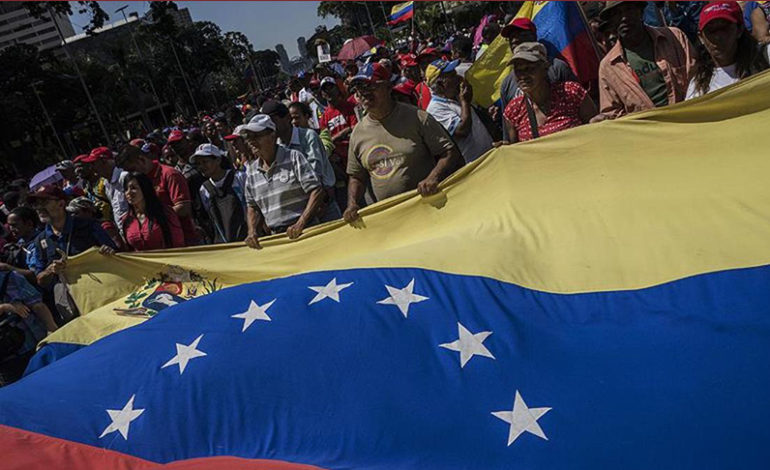 Venezuela has been a target on the American radar for many years.

American politicians from the two main parties have finally found something to agree upon: More intervention in Venezuela.

“Now, despite (President Nicolas) Maduro, there is hope (in Venezuela),” wrote Democratic Senator Dick Durbin in USA Today. “These events (meaning the current political instability in the country) are a welcome development of Latin American nations defending democracy.”

“He’s picked a battle he can’t win,” Republican Senator Marco Rubio said, referring to Maduro in an interview, quoted in the New York Times. “It’s just a matter of time. The only thing we don’t know is how long it will take — and whether it will be peaceful or bloody.”

This unprecedented unity between Democrats and Republicans reflects an American legacy that precedes the current Trump administration by nearly two centuries. In fact, it goes much further and deeper than the U.S. hegemonic approach to South America, to encompass the entire Western political hemisphere, with the exception of Italy, Norway and Greece.

The West’s love affair with intervention has little to do with restoring democracy, either in Venezuela or anywhere else. “Democracy” has been used throughout the 20th century as a tool that provided legal and moral rationalization for U.S. and Western meddling. It matters little to Western leaders that Maduro was elected in presidential elections deemed “transparent” by international observers in May 2018.

Notwithstanding Maduro’s own shortcomings in uniting his people in the face of a most pressing economic crisis, what gives Trump, Canada’s Justin Trudeau and France’s Emmanuel Macron the right to cast a deciding vote on who rules over Venezuela?

Sadly, Venezuela is neither the precedent nor the exception. South America — as are the Middle East and Africa — has for long been perceived as if a Western protectorate going back many years. They are all rich with oil and other essential raw materials, but are also strategically significant in terms of global hegemony. Colonialism might have ended in its traditional form (with Palestine being the main exception) but it lives on in other ways.

While the U.S. and its Western allies are strongly challenged by rising economic and military powers in Asia, the fate of South America, the Middle East and Africa is yet to be decided. The U.S., in particular, has always viewed South America as its own turf and has either directly or indirectly contributed to coups, political and economic instability throughout the region.

U.S. National Security Adviser John Bolton has garnered a terrible reputation due to his role in the invasion of Iraq and the subsequent destabilization of the Middle East. Although discredited for his thoughtless and often militant approach to politics, he was resurrected by the Trump administration and is now travelling the world sowing the seeds of political and military discord.

While speaking about Washington’s need to “protect democracy” in Venezuela, Bolton admitted that a coup in Venezuela is an opportunity to exploit the country’s vast oil and natural resources.

Bolton explained the economic logic of U.S. intervention in an interview with Fox News, soon after Venezuelan opposition leader Juan Guaidó, a main ally of the U.S., declared himself an “interim president” on January 23.

A regime change in Venezuela “will make a big difference to the United States economically, if we could have American oil companies invest in and produce the oil capabilities in Venezuela,” Bolton said.

But how is that to be achieved?

During a press conference at the White House a few days after the coup, Bolton “appeared to disclose confidential notes written on a yellow pad that included a plan to send U.S. troops to Colombia” in preparation for a military intervention in Venezuela.

Hasn’t Iraq quelled Bolton’s appetite for intervention, considering that the entire Middle East region now subsists in political uncertainty and unrelenting wars? And if Bolton is yet to get a hint that the world is rapidly changing, and that it behooves his country to reconsider its destructive interventionist foreign policy, why are Democrats joining in, along with the “liberal” and “socialist” European powers?

“Old habits die hard”, as the saying goes, and it seems that Western politicians refuse to abandon the old interventionist maxim and colonialist mentality through which they ruled the world for far too long.

This view is not meant to undermine the horrific economic conditions in Venezuela or overlook the endemic corruption in that country, which need to be understood and, if needed, criticized. But while the Venezuelan people have every right to protest their government, demanding greater accountability and economic solutions to the crushing poverty facing the country, no one has the right to meddle in the affairs of Venezuela or any other sovereign country, anywhere.

Moreover, it must be clear that neither the U.S. nor its allies are interested in helping Venezuela to overcome its economic woes. In fact, they seem to be doing everything in their power to exacerbate the problem.

Hyperinflation and the crumbling of Venezuela’s oil industries led to a dramatic economic downturn in recent years, with about 10 percent of the population fleeing the country. Poor policy choices also led to the significant weakening of local production and increasing devaluation of the country’s currency.

Venezuela has been a target on the American radar for many years. The deterioration of its economy, however, was the perfect opportunity for the U.S. to trigger its Venezuelan allies into action, this leading to the current coup and political stalemate.

But those counting on the U.S. to stabilize Venezuela in the long run are ignorant of history. The U.S. government has hardly ever been a source of stability in South America, certainly not since the Monroe Doctrine of 1823. Since then, the U.S. has done more than mere meddling, but engaged in outright political and military interventions.

The situation in Venezuela is dire, with children reportedly dying as a result of the lack of medicine and food. The country is also gearing up for a U.S. military intervention and possible civil war.

Considering that all of these tragic predictions have already been witnessed in Iraq, Syria, Libya and elsewhere, South American leaders, and the few sensible voices around the world, must move to block any further U.S. meddling, and allow the people of Venezuela, through democracy, to determine their own future.