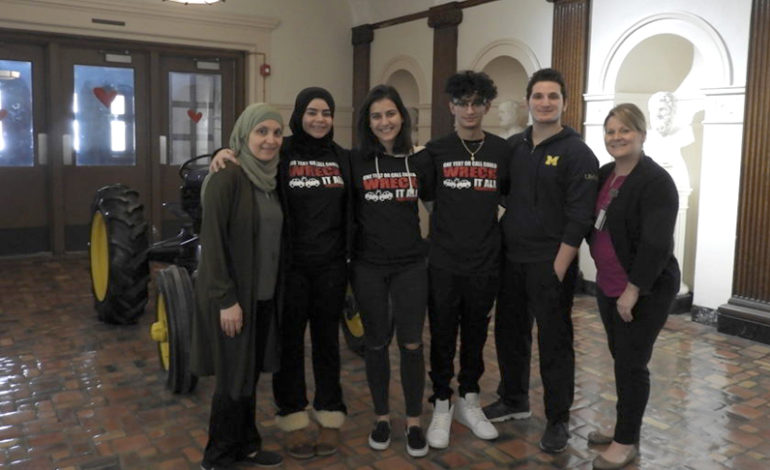 This is a teen driving initiative aimed at reducing serious traffic crashes, injuries and fatalities among Michigan’s most inexperienced drivers – teens. It’s presented by Ford Driving Skills for Life (DSFL) and the Michigan Office of Highway Safety Planning (OHSP).

The task force, also referred to as Strive for a Better Drive, was first established in December, and more students began to take initiative after driver fatalities became more common within the city and across the country.

According to the Michigan Department of Health and Human Services, three out of five accidental deaths for youths ages 16 to 20 are due to motor vehicle crashes.

For their part, after receiving many responses upon starting the initiative, committee members said people expressed positive hopes, while others had a negative interpretation of the organization’s outlook.

Members of Strive for a Better Drive passionately said they also started this as a platform for dialogue.

“It’s that we’re sick of losing lives,” said Alex Elamine, a task force committee member from Fordson. “There has been at least one student from every high school (in the Dearborn School District) who has lost a life due to reckless driving in the past two years.”

He expressed his concern about the many families and community members affected due to a loss because of distracted driving.

“The family from Northville who died from an accident out of state deeply affected our community,” Nour Sami, another member from the committee, said. “It hits home when accidents like this happen.”

Rima Saad from Strive for a Better Drive emphasized the negativity such fatalities bring to the community as a whole.

While the main purpose is to prevent accidents from happening, the committee also hopes to see the city of Dearborn strive to its positive potential rather than always being known for car accidents on social media and from neighboring towns.

“We could be known for the achievements and accomplishments of the city, but the teenagers are mostly known for the car accidents and wreckage,” Saad told The AANews. “I want to throw away that name and want to mainly focus on saving lives around our schools.”

The idea was initially brought up by Ford Driving Skills for Life, which offered the grant for the organization to take the initiative at the school.

In collaboration with Ford DSFL and OHSP, Strive for a Better Drive focuses on key areas such as driver distraction, speed and space management, and hazard recognition.

Ford DSFL teaches teens the skills they need to be safe on the roads; the program features a website, hands-on driving events and other materials. DSFL hold assemblies, car simulation days and the Ford Ride and Drive event.

In the Ride and Drive event, students get behind the wheel of a specially equipped vehicle on a closed course with a professional driver in the passenger seat. Instruction covers a variety of safe driving topics. Fordson’s committee also likes to take part in this.

Platform for dialogue and making change

Strive for a Better Drive mainly targets drivers from the ages of 16-19. Its mission is to reduce driver youth fatalities, raise awareness of distracted driving and to educate the community on common fatalities and misconceptions in the community.

On some days, committee members like to wear their committee shirts and share the focus across campus. Members described the venture as sharing a fact as students and staff approach someone wearing the shirt.

Other ventures include holding assemblies and educating students on certain mobile apps that are made to not disturb a driver. Many applications are made to be downloaded on Apple and Android devices.

Ali Dabaja, a member of Strive for a Better Drive, said he recently joined the initiative after being involved in his second accident. He said sharing his personal story also gave students a deeper touch.

“Students will relate more to students rather than constantly being told that ‘something is bad,’” Dabaja said.

As this year’s focus is distracted driving, Fordson’s task force plans to implement additional safety precaution and awareness events to the school and community.

Saad told The AANews that the committee hopes to add speed bumps in the student parking lot.

Other projects include holding more assemblies, the Ford Ride and Drive event and car simulations.

“We’re going to start in the school first, and we then hope to venture off and host more public events,” Saad said.

The organization expressed enthusiasm towards someday involving Dearborn City Council members, the Dearborn Police Department, Mayor Jack O’Reilly, the school board and the community. Members hope to take this initiative to the state and, eventually, the federal level.

The team is currently planning on filming a short video on distracted driving, focusing on topics ranging from drag racing to texting while driving.

One takeaway message from students at Fordson would be to take a stride, stay alert and drive safe.

“It’s not worth it,” Dabaja said about distracted driving. “I was that person.”