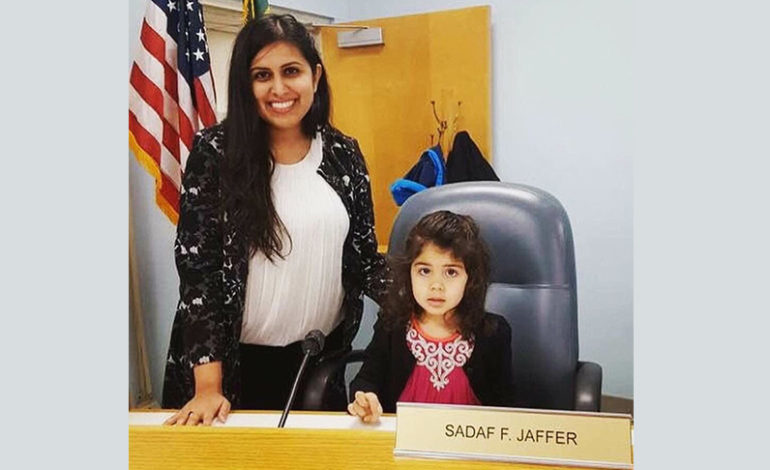 Sadaf Jaffer. Photo by the HuffPost

Jaffer has a doctorate from Harvard with a specialization in Islam, gender studies and South Asian history. She also serves as a postdoctoral research associate in South Asian studies at Princeton University, where she teaches courses on South Asian, Islamic and Asian American studies.

“I decided to run for public office because I didn’t see my values reflected in my elected officials,” Jaffer told the Religious News Service (RNS). “I’ve been a scholar and activist for some time. If you keep advocating to people who just don’t share your values, you eventually hit a wall. I also believe we shouldn’t ask others to do something we’re not willing to do ourselves. If I want people from diverse backgrounds to run for office, I should also be willing to do it myself.”

Jaffer cites her religious views as motivation for entering the political arena.

“Since I decided to pursue research on Islam in South Asia for my Ph.D., I’ve also come to see the ways in which religion and culture have always been intertwined,” she said. “And I find much hope in how cosmopolitan societies have functioned in the past. They certainly weren’t perfect, but I see the Islamic past as one of great beauty and cultural efflorescence. That inspires me for the future.”

Jaffer said that she used her experience as a scholar to help authorities during an anti-Muslim hate crime that happened in her town.

“I was able to tap into my experience teaching a course on South Asian American literature and film to provide resources to government officials about Islamophobia as racism,” she said.

Jaffer started a monthly discussion group called Montgomery Mosaic, which is affiliated with the national Not in Our Town movement. She said this project has been, “impactful in bringing people together in order to understand our common humanity.”

“I’m proud to be an example of what is possible for Muslim women in our political system,” she said. “We stand on the shoulders of generations of activists who have made these opportunities possible.”

Jaffer also said she hopes her position as a Muslim scholar and mayor serves as an example that, “helps provide a different vision of what it means to be a Muslim woman in America today and the diversity of perspectives and skills we bring to the table.”