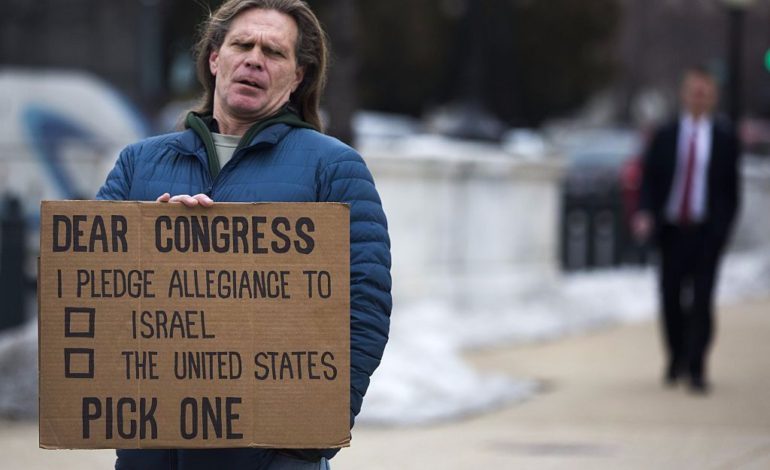 Hardline supporters of Israel are in panic mode. It was in evidence earlier this week with the all-out assault on the first Somali, African-born immigrant, refugee, Muslim woman elected to serve in the U.S. Congress. Her crime was that she dared to point out, as a leading New York Times columnist and so many others have in the past, the intimidating role that AIPAC plays in shaping U.S. policy toward Israel. The response was nearly hysterical.

Republicans used her as a scapegoat, hoping to turn her into a wedge issue to show that Democrats could no longer be trusted as unquestionable supporters of any and all Israeli policies. Sadly, some Democrats, cowering, piled on and joined in the denunciation.

The problem, quite simply, is that those who have given Israel a blank check are losing ground among young and minority voters and don’t know what to do. Polls show a deep partisan/demographic split on American support for Israel – with millennials and minority voters moving away from Israel toward a more balanced, and even pro-Palestinian, direction. While Republicans are quite pleased with this rift and seek to exploit it to their advantage, some Democrats want to have it both ways. They want to maintain the support from these key constituencies, while at the same time silencing their opposition to Israeli polices.

Reflecting this shift in attitudes, most of the 2020 Democratic presidential aspirants voted against a Senate bill that encourage states to violate the First Amendment by punishing individuals who participate in boycotting Israel. And, of course, the 116th Congress includes two Muslim women, a Somali and a Palestinian, who make no bones about their criticism of Israeli policies that violate Palestinian human rights.

Given this changing landscape, the reasons for the panic are clear enough. What is outrageous, however, has been the way supporters of Israel have decided to respond. They have weaponized anti-Semitism, turning it into a blunt instrument in a crude effort to pummel opponents and silence legitimate debate on the Israeli-Palestinian conflict. There are currently bills before Congress that redefine anti-Semitism to include criticism of Israel, criminalize participation in the boycott of Israel and another that condemns anti-Semitism, but conflates criticism of Israel with heinous behaviors that defame the Jewish people.

As further evidence of the change that’s afoot, a few weeks back, one of the New York Times newest opinion writers, Michelle Alexander, penned a significant piece tracing how and why she, an African American civil rights champion, had come to “make a break with Israel.” This past Sunday, most likely in response to Alexander’s column, the Times published an article by another of its writers, Bret Stephens. The piece was a dizzying mess of faulty logic, bogus “straw men” and fictive history clumsily patched together in an effort to equate what he calls “the progressive left’s criticism of Israel” with anti-Semitism.

Stephens rhetorically asks why the left is so critical of Israel and begins his answer by outlining what he claims is their indictment against Israel:

“More than a half-century of occupation of Palestinian territories that fair-minded people can no longer ignore, especially given America’s financial support for Israel. Continued settlement expansion in the West Bank proves Israel has no interest in making peace on equitable terms. And endless occupation makes Israel’s democracy less about Jewish self-determination than it is about ethnic subjugation.”

Sounds right to me. But to Stephens this progressive argument is patently false. To make his case, he relies on fictional accounts of history – that are, at best, half true.

To establish that Israel has long wanted to recognize a Palestinian state, he claims that Israeli prime ministers offered a state in 2000 and 2008, but were rebuffed. In fact, both offers were made by prime ministers who were on their way out the door – both with single-digit favorable ratings and soon to be booted out of office. Stephens neglected to mention that even then-Israeli Foreign Minister Shlomo Ben-Ami had conceded that the offer made to the Palestinians in 2000 was inadequate and unworthy of acceptance. His boasting that Ariel Sharon removed every single settlement from Gaza ignores the reality that the withdrawal was done unilaterally without consultation with the Palestinian Authority, as the U.S. had insisted. And that Israel never “left” Gaza, but had simply pulled out the illegal settlements, then turned it into a captive open-air prison.

To demonstrate Palestinian cruelty, Stephens notes the number of Israelis killed by Palestinians in this century, but ignores the fact that eight times more Palestinians have been killed by Israelis during the same period.

To prove his bona fides, Stephens declares “I support a two-state solution”, but goes on to argue against those who oppose the very Israeli settlement construction that has made that outcome impossible to realize. He says that those who say that Israel ought to stop building in the occupied lands and make peace with the Palestinians are guilty of “calumny.” In fact, he’s the one guilty of calumny since he claims that the opponents of settlements are all guilty of charging Israel with “boundless greed for Palestinian land and wicked indifference to their plight.”

Finally, Stephens takes up the matter of anti-Zionism, which, he claims, is nothing more than the latest iteration of anti-Semitism. Israel is, he maintains, a democracy that is “the home of nearly nine million citizens, with an identity that is as distinctly and proudly Israeli as the Dutch are Dutch…” He ignores the recently passed Jewish Nation State Law that declares Israel as exclusively Jewish – reducing to second class citizenship the 21 percent of Israel’s population who are Palestinian Arabs. It is true, as Stephens facilely points out, that Palestinian citizens of Israel can serve in the Knesset, but he ignores the fact that they are subject to discrimination in housing, access to public transportation, health care, university admissions (there are specific areas of study they cannot enter) and are at the receiving end of more than 50 laws that discriminate against them.

So while Stephens considers pointing out these flaws as anti-Semitic, in fact, his obvious contempt for the humanity of Palestinians, their history of dispossession and their treatment either as second-class citizens of Israel or as victims of a brutal occupation, can only be described as racist.

In the end, if we are honest with ourselves, we are left with a situation that must be addressed. Change is coming. Those who have been able to use pressure to silence debate on Israeli behaviors and Palestinian rights need to learn that continuing to do so will not silence voices of dissent, they will only make them stronger. The message is clear and writ large – “Game Over!”