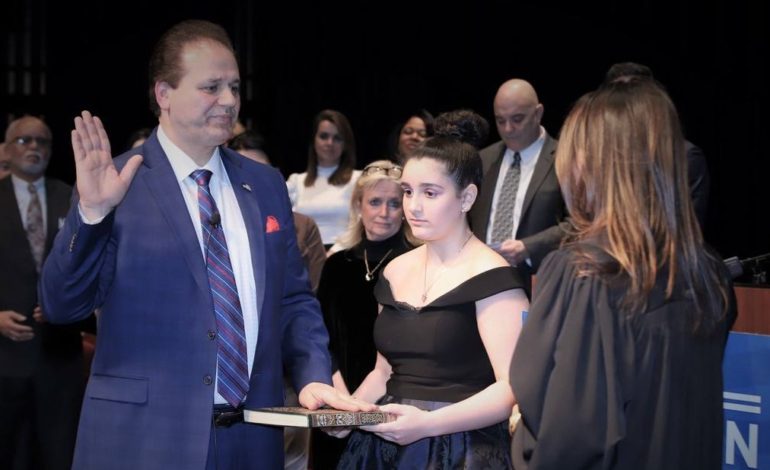 Sam Baydoun is sworn in by his daughter Lilly and Judge Mariam Bazzi. Photo via Shehab Pro Media. Baydoun was sworn in as the new Wayne County commissioner for the 13th District seat vacated by departing commissioner Gary Woronchak, in front of friends, political and religious leaders, and colleagues.

He will join Al Haidous and become the second Arab American on the commission.

“I’m grateful for your support and I sincerely thank all of you for putting your trust in me,” Baydoun said. “To every resident in Dearborn and Allen Park who displayed one of my lawn signs and voted for me in the election, I thank you from the bottom of my heart for voting for me.”

Baydoun also thanked his colleagues as well as his wife, Ibtihal, who he said is “very ill” and was the only thing missing from the night’s “beautiful” event.

“She is with me in spirit and I see her through my beautiful children,” Baydoun said. “I am where I am today because of her.”

His children Moe, Ally, Angela and Lilly were also among those in attendance along with Baydoun’s brothers, with Lilly holding the Qur’an on which he was sworn in.

“He is the rock of the family,” Lilly said. “He brings joy into my mother’s world; she loves to see him do what he enjoys doing the most, and that is helping people.”

He called Baydoun a “great listener”, even at times when he knew more about a topic than the person speaking.

“He’s very, very concerned about other folks,” Evans said. “It’s not just about Sam, but it was about what he could do for a community; and that’s very important to me.”

Her late husband, U.S. Rep. John Dingell, the former “Dean of the House”, was a close friend and longtime support of Baydoun. She said he’d wished he could be at the event.

“He is,” someone in the crowd shouted in response.

Dingell also gave a shout-out to fellow Congresswoman Rashida Tlaib, who shared the stage, and praised Baydoun for his caring heart.

She noted the time when Baydoun went with her to an auto repair shop to make sure her car was fixed.

“You’re very lucky he’s serving as commissioner,” she said. “He will make us proud.”

Baydoun recalled President’s Day 2018, when he announced his candidacy and wheeled the 91-year-old John Dingell to the stage in the Hubbard Ballroom as the first political leader to support his campaign, calling Dingell a “dear friend, American hero and esteemed public servant.”

He also praised Evans for his focus on community and unity, and thanked his supporters.

“To the thousands of individuals who supported my campaign, I’m very grateful for all of your support,” he said. “We could not run a successful campaign without your generosity, I’m very humbled by all the support, it touched my heart.

“As I began this new journey in my life I thank you, and may God bless you and the United States of America.”