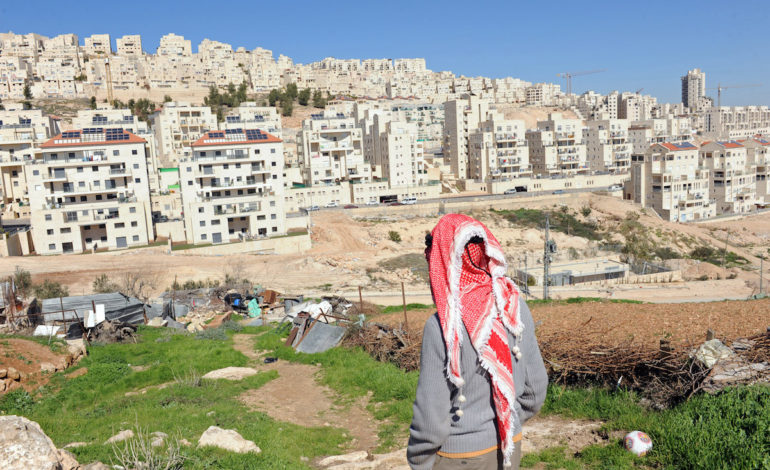 A Palestinian stands on his property overlooking the Israeli settlement of Har Homa, West Bank. Photo by UPI/Debbie Hill)

Jerusalem’s planning and construction committee approved the project earlier this week, paving the way for 4,416 housing new units in the city.

“This is happy news for me and young couples in the city of Jerusalem,” Jerusalem’s mayor Moshe Lion said.

“We will increase housing units and bring back the youth to their home. This is the beginning, and soon Jerusalem’s sky will be filled with cranes.”

The settlement project will also reportedly see the expansion of the occupied West Bank industrial zone of Atarot, located in the central district of the Palestinian city of Ramallah.

The news was announced two weeks after reports that dozens of Israeli ministers and senior lawmakers from Israeli Prime Minister Benjamin Netanyahu’s Likud and other right-wing parties signed a petition to promote a settlement plan that would settle 2 million Jews in the occupied West Bank.

Among the people who signed the declaration were Israel’s ministers for justice, education, transportation, tourism, environmental protection and Jerusalem affairs, public security, culture, communications, immigration and social equality, according to the Jewish News Syndicate (JNS).

The movement’s declaration reads: “I hereby commit to be loyal to the land of Israel, not to cede one inch of our inheritance from our forefathers. I hereby commit to act to realize the settlement plan for the settlement of 2 million Jews in Judea and Samaria…as well as to encourage and lead the redemption of all the lands throughout Judea and Samaria. I commit to act to cancel the declaration of two states for two peoples and replace it with the stately declaration: ‘The land of Israel: One country for one people.’ ”

JNS quoted the so-called Nahala movement in a statement, saying the signing of the petition ahead of the elections “constitutes an ideological and ethical loyalty test for the various contenders.”

Spreading the virus of occupation: Spitting as a weapon in the hand of colonial Israel