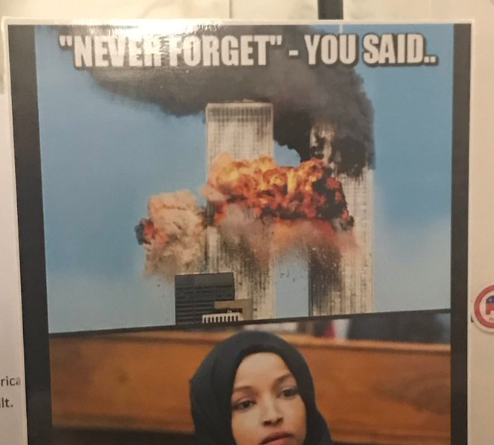 CHARLESTON, WV — A photo of the former World Trade Center on fire from the 2001 terrorist attacks in New York along with an inciteful picture of U.S. Rep. Ilhan Omar (D- MN) was displayed at the state capitol building Friday, increasing tensions and leading to anger-fueled arguments that nearly came to blows, the resignation of one key state official, an injury to one worker and several impassioned speeches.

The picture, displayed on the rotunda by the state Republican Party according to a report from NBC News, carried the caption “never forget – you said”, with a picture of the twin towers burning, followed by “I am the proof – you have forgotten” as a caption under the picture of Omar, who is wearing a hijab.

One staff member, a doorman, was physically injured during a scuffle, the report said.

“We have allowed national level politics to become a cancer on our state,” House speaker Roger Hanshaw said.

Omar responded to the incident in a tweet on Friday, followed by a praying emoji in her next tweet.

“No wonder why I am on the ‘Hitlist’ of a domestic terrorist and ‘Assassinate Ilhan Omar’ is written on my local gas stations.”

The display was set up as part of “WV GOP Day”, which was advertised by party members as a day when “Republicans Take the Rotunda.”
The House’s sergeant at arms, Anne Lieberman, allegedly proclaimed that “all Muslims are terrorists”, which was responded to by delegate Mike Angelucci, a Democrat from Marion, West Virginia, who called her remarks “hate speech.”

“I am furious, and I don’t want to see her representing the people of this great state in the House again,” Angelucci said of Lieberman, who became the first woman to ascend to her post in the state last year.

By the end of the day, Lieberman submitted her resignation “’effective immediately,’” officials said.

An investigation is now underway, according to Hanshaw.

“As we began today’s floor session, we had a series of incidents occur in and outside of our Chamber that absolutely do not reflect the character and civility the people of this state demand of their public servants. Leadership of the House of Delegates is currently working to investigate these incidents to learn firsthand the factual basis of what occurred, and will respond with appropriate action,” a statement released from his office said.

“I find it distasteful. I said so. I went over and spoke with the people in that booth that I believe is sanctioned by a political party,” said Democrat and delegate Mike Pushkin, of Kanawha, who is Jewish.

“It points out a hatred and distrust of somebody because of their religion.”