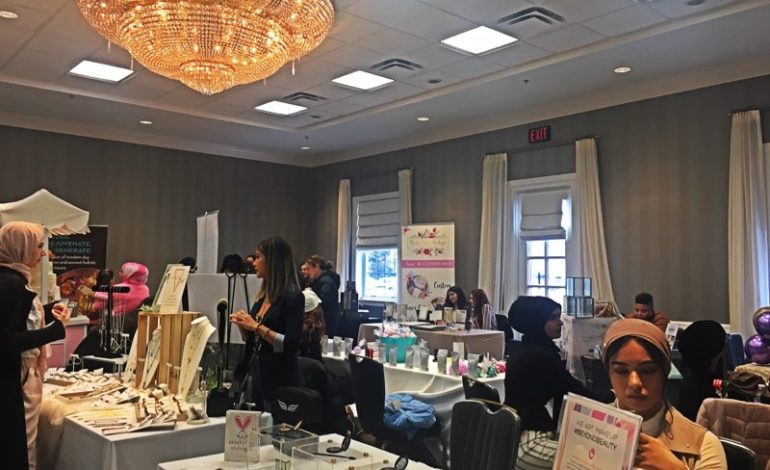 Women's bazaar hosted by AAWBC -Photo by The AANews

DEARBORN — The Arab American Women’s Business Council (AAWBC), a nonprofit organization that addresses the needs of Arab American women professionals and business owners, held a women’s bazaar at the Dearborn Inn on March 7.

The AAWBC, which was founded in 2007 in Dearborn, also helps cater to the needs of young Arab American women seeking professional careers within Michigan and across the United States. It assists members by providing mentorship, internships, scholarships and professional development programs.

To celebrate International Women’s Day, the networking with a purpose bazaar featured many women business owners and organization leaders.

International Women’s Day is celebrated on March 8 every year as a focal point in the movement for women’s rights.

In 1917 after women gained suffrage in Soviet Russia, March 8 became a national holiday there. It was then adopted by the United Nations in 1975.

This is the first year of the women’s bazaar and organization members look forward to more networking events in the future. The event included raffles, refreshments, networking, resume reviews and headshots.

Jameleh Haidous, president of AAWBC and business relationship manager at JP Morgan Chase & Co, told The AANews the women’s bazaar is not only a networking event, but that she also loves to see women support each other and get more exposure to their businesses.

Haidous said the AAWBC offers resume reviews during some networking events to better guide women to navigate their way to success.

“We like to give out a more polished, easy-to-read resume,” she said. “I think sometimes people either put too much or too little information.”

She added that there are keywords employers look for based on the job offers.

“We like to highlight the correlation between previous experiences to what we’re applying for now,” Haidous said.

More than 30 vendors were present during the event.

“I used to suffer from back pain, and I was inspired to find a way to impact others,” said Heba, owner of “H Bombs.”

She has been running her business successfully for more than one year and offers the following services: Body soap, bath bombs, scents and other organic beauty products.

Heba describes her business as a service to patients who suffer from chronic pain, osteoporosis and arthritis.

A takeaway message from this young business owner is to always put in the work to see great results.

“This (business) became possible through trial and error,” she said.

Another vendor, Iverson’s Bakery, won the award of Number 1 cake in Michigan by the Food Network in 2018.

Iverson’s Bakery has been in Dearborn since 1920 and is now under the new ownership of Patty Darwish and Amy Ayoub.

Motor Boutique, which is run by Paulette West and Marilyn Smith, is a bus boutique that pulls up at any location where people can conveniently shop.

It mainly offers handbags and wallets.

“Store at your step” is the motto for their privately run business.