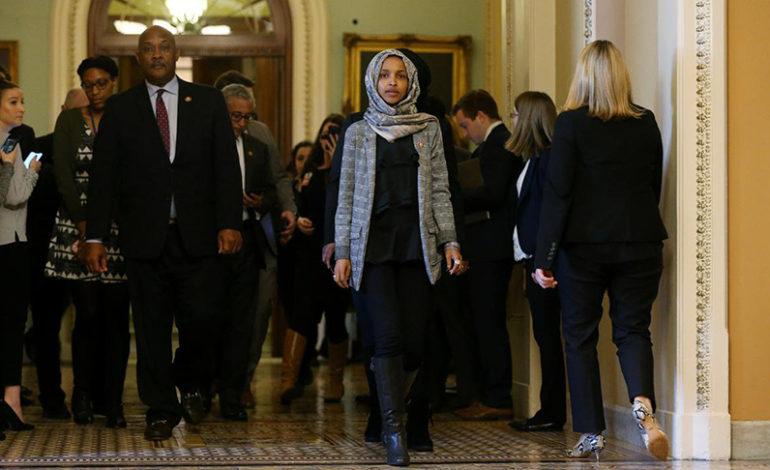 On Thursday, the U.S. House of Representatives overwhelmingly passed a resolution by a vote of 407-to-23 to condemn both anti-Semitism and anti-Muslim hatred, among other forms of bigotry, including those of White Supremacists, a development Democratic U.S. Reps Rashida Tlaib of Michigan, Ilhan Omar of Minnesota and Andre Carson of Indiana called  “historic on many fronts.”

“We are tremendously proud to be part of a body that has put forth a condemnation of all forms of bigotry,” the three Muslim legislators said in a joint statement following their affirmative vote on the resolution. The 23 nays vote were all from Republicans.

The vote was historic because it was the first time the U.S. Congress has even voted on, let alone passed, a resolution condemning anti-Muslim hatred side by side with anti-Semitism.

The vote came less than a week after Representative Ilhan Omar made statements at a Washington event that were denounced by some Jewish lawmakers, among others, as anti-Semitic. Omar refuted the claim and insisted that she was referring to the dual loyalty that some legislators have when it comes to Israel.

Omar, in an appearance at a Washington book store, said she feared that statements she and Tlaib made about foreign policy and the pro-Israel lobbying group the American Israel Public Affairs Committee (AIPAC) would be viewed as anti-Semitic because they are Muslim. “I want to talk about the political influence in this country that says it’s OK for people to push for allegiance to a foreign country,” Omar said. “I want to ask why is it OK for me to talk about the influence of the NRA (National Rifle Association), of fossil fuel industries or Big Pharma and not talk about a powerful lobbying group that is influencing policies?”

Omar’s critics denounced the statement as playing into the anti-Semitic trope that Jewish Americans are loyal to Israel over the United States. Omar said opposing the policies of Israel and Prime Minister Benjamin Netanyahu is not synonymous with anti-Semitism.

The resolution does not mention Omar by name, but Republicans have seized on her statements and the resulting intra-party conflict as a sign the Democratic Party is fractured.

In fact, the Republican leadership quickly tried to capitalized on the anti-Semitism sentiments to blackmail the Democrats, hoping to gain in the upcoming 2020 elections the ground they lost in the midterm elections last November.

Many Democrats, in turn, have said House leaders were cowed by a Republican effort to divert attention from bigotry within their own ranks and that Omar is being held to a different standard. They refused to throw Omar under the bus.

Thursday’s vote was also historic because it sent an undeniably strong message to AIPAC that its days of bulldozing the legitimate concerns of others and stifling debate about the occupation of Palestine using its trump card of “anti-Semitism” charges are over. A former AIPAC executive, Steven Rosen, was fond of telling people that he could take out a napkin at any Senate hangout and get signatures of support for one issue or another from scores of senators. These were the dark days on Capitol Hill.

They tried to silence Omar simply for speaking the truth about the pro-Israel lobby in the United States. Instead, she stood her ground and made history, again.

And in a bold display of unity inspired by our two brave pioneering Muslim American congresswomen, progressives, the Black Caucus movement and other forward-thinking voices in Congress used it as an opportunity to send a message loud and clear that no form of hatred should be tolerated, including from the White supremacist movement that has become more active since Donald Trump took office.

We are not saying anti-Semitism isn’t real. In fact, far from it.

But what we are saying is that the many other marginalized, oppressed and targeted communities of the United States have just as much right to protection as anyone else, especially the Arab and Muslim American communities, which have become targets for far too long.

Anti-Muslim crimes have increased 99 percent between 2014 and 2016 and continue to rise, according to FBI statistics.

That’s where our attention should be focused as we move forward as a country, because the way Muslim and Arab Americans are being treated is simply unacceptable.

Thursday’s resolution doesn’t do enough to address this gravely serious issue, but it still counts as an important step in the right direction.

It’s one that we can all continue to build upon; and one that AIPAC and its blind followers, especially in a Republican Party whose rhetoric has given rise to this climate of hatred, won’t soon forget.