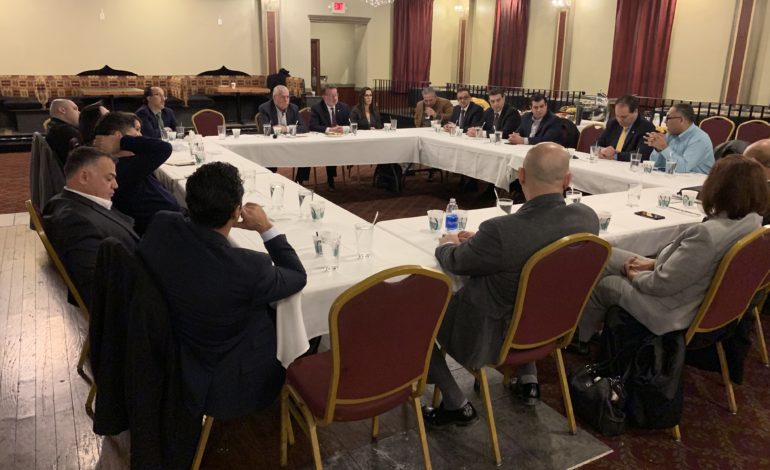 DEARBORN — A March 4 meeting between Sen. Gary Peters (D-MI) and Arab American community leaders at the La Pita restaurant ended with the senator failing to mollify participants regarding his vote on the anti-BDS bill.

At the meeting, Peters addressed his choice to vote “yes” on Bill S.1, which includes the controversial Combating BDS Act condemned by the ACLU, CAIR, the ACRL and other civil rights organizations for giving states the opportunity to punish individuals and companies who wish to boycott Israel.

“I agree with all of you that the appearance of the impact on First Amendment rights is very clear when you’re dealing with very small entities,” Peters said at the meeting. “The way it’s been applied in some states, Texas is an example I think is horrible.”

Peters said he spent time with Sen. Marco Rubio (R-FL) in an attempt to make five amendments to the bill.

“I thought it would be a way to move forward that would certainly not be a perception of attack on First Amendment rights,” he said.

Peters said Rubio told him he already had enough votes for the bill and chose not to work with him on the amendments.

“The fact that Marco Rubio would not work with him was not a surprise,” said Amer Zahr, an adjunct professor at University of Detroit Mercy. “What’s surprising is that after the senator knew that, and that the bill was unlikely to make it through the House, he still voted for it even though he expressed deep concerns over the First Amendment implications.

“I’m happy that the senator met with us and I’m happy that our community spoke with him in a unified way,” Zahr added. “This wasn’t a matter of a basic disagreement on an issue. This was a matter of us expecting our elected officials to protect our basic First Amendment, free speech rights and he did not do that with his vote for S.1.”

Zahr also said he supported Peters for a long time without thinking much about it, but now that’s changed.

“Because of his vote my support for him was no longer automatic,” he said. “In fact it withered quite greatly. And nothing that happened in that meeting changed my mind about that.”

Nabih Ayad, founder of the Arab American Civil Rights league, said he thought Peters probably didn’t anticipate such a passionate disappointment from his constituents with his decision to vote “yes” on the bill.

He also said that if Arab Americans can’t get respect in this region of the country, then they really start to lack hope in any other region.

“They know they represent a large constituency of Arab Americans,” he said of elected officials like Peters. “They need to understand it’s extremely disappointing. It’s confirmed to a certain extent that we are not as relevant as we hope we are.

“It’s not really an Israeli, Palestinian or Arab issue,” he added. “It’s really a First Amendment issue. If the Israeli lobbyists can get our own senators to pass a bill that violates our First Amendment right to boycott, it’s really a scary thought.”

“I thought it was a positive sign that he came to the community to hear our concerns,” attorney James Allen told The AANews. “The fact that he left without agreeing with us is nothing new, but the openness that was reflected by leaders in the room discussing the subject coupled with the senator’s willingness to hear those views is all part of the process by which we’re hopefully able to convince our elected representative to vote in a way that’s reflective of what’s important to us as a community.”

Allen added that while he certainly didn’t leave the meeting believing that Peters was in lock-step with his views on the BDS issue, he also recognizes that we’re not always able to have our representatives be with us 100 percent of the time.

“I hope that over time, with continued dialogue, he will take our concerns into consideration with legislation of this sort in the future,” he said.

“I appreciated the opportunity to hear from community leaders about their concerns and ways we can continue working together moving forward,” Peters said in a statement. “Among other topics, we discussed legislation that was recently passed by the Senate related to Middle East security that contained provisions many in the community expressed concerns about. I shared their concerns that the legislation as written was too broad and that’s why I offered several amendments in an effort to make the legislation better. Unfortunately, my amendments were blocked by Senate Republicans and the legislation included key defense provisions to support our allies – including Jordan. However, after the bill passed, I wrote to Speaker Pelosi about my concerns and reiterated my call to make changes to the bill should the House of Representatives consider it.”

At the meeting community leaders also raised continued concerns over the terrorist watchlist. The federal government acknowledged in February that it shared the watchlist with more than 1,400 private entities, including hospitals, banks and universities.

“As ranking member of the Senate Homeland Security and Governmental Affairs Committee, I’m also committed to addressing issues I heard related to constituents being wrongly named on federal watch lists,” Peters said in a statement. “There must be a fair process for community members incorrectly on this list to clear their name. This is an issue I directly raised with Homeland Security Secretary Nielsen and I’ll continue engaging with the Department of Homeland Security. I am committed to working with my colleagues to conduct oversight and address this issue legislatively.”