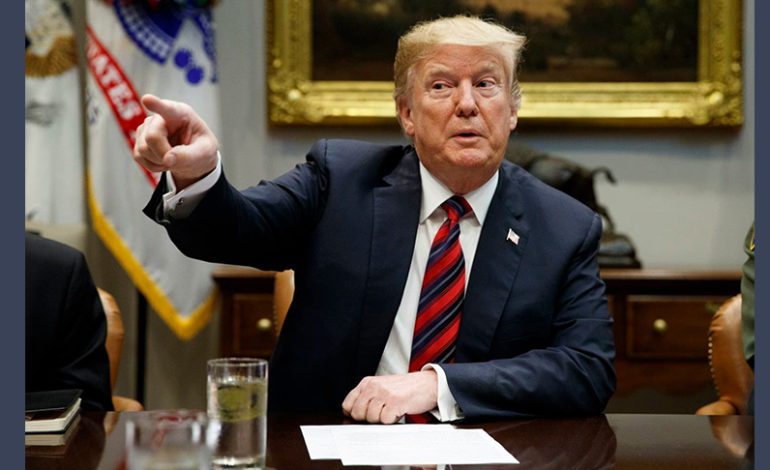 President Trump speaks during a briefing on drug trafficking at the southern border in the Roosevelt Room of the White House on Wednesday. - AP

WASHINGTON, DC — On Thursday, the Senate rebuked President Trump by voting to end his border emergency declaration, as 12 Republicans joined Democrats to deliver a second blow in as many days to the president, who quickly pledged a veto.

The 59-41 vote was a bipartisan repudiation of Trump’s decision to circumvent Congress and take money already designated for other programs and redirect it to pay for his U.S.-Mexico border wall, which he promised to build during his 2016 campaign.

In the first two years of his term, the Republican-led Congress mostly accommodated Trump, which spared him from having to use his veto pen. With Republicans showing increased willingness to defy him, Trump promised a change.

“VETO!” he tweeted shortly after the vote.

The vote on Thursday marked back-to-back defeats for Trump in the Republican-controlled Senate. On Wednesday, senators approved a resolution seeking to end U.S. support for a Saudi Arabia-led coalition in the war in Yemen, rejecting Trump’s policy toward the kingdom.

“Today’s votes cap a week of something the American people haven’t seen enough of in the last two years,” Senate Democratic leader Chuck Schumer told reporters. “My hope is that this past week isn’t an aberration, but a turning point.”

A House of Representatives leadership aide said there would likely be a vote to attempt to override Trump’s promised veto on March 26 after lawmakers return from a one-week recess.

The measure is unlikely to become law as there are enough Republicans in the House and Senate to sustain a Trump veto, which requires a two-thirds majority in both chambers to override. The issue could ultimately be decided by the courts.

Trump has made clamping down on illegal immigration a cornerstone of his presidency and it promises to be central to his 2020 re-election campaign.

His drive for billions of dollars to build a U.S.-Mexico border wall — one that he initially promised Mexico would pay for — has placed a wedge between him and Congress, including many Republicans who are uncomfortable even talking about a “wall.” Many in Congress say effective border security requires a range of law enforcement tools.

Senate Majority Leader Mitch McConnell had urged his fellow Republicans to defeat the resolution rejecting the emergency declaration, which was passed in February by the Democratic-controlled U.S. House of Representatives.

Republicans who defected by supporting the measure to end the emergency declaration are worried that presidents — including future Democratic ones — could usurp the power of Congress to fund the government and use the tactic to pass their own pet programs.

McConnell said Trump was “operating within existing law” and that if senators did not like the powers provided to the president under the National Emergencies Act, “then they should amend it.”