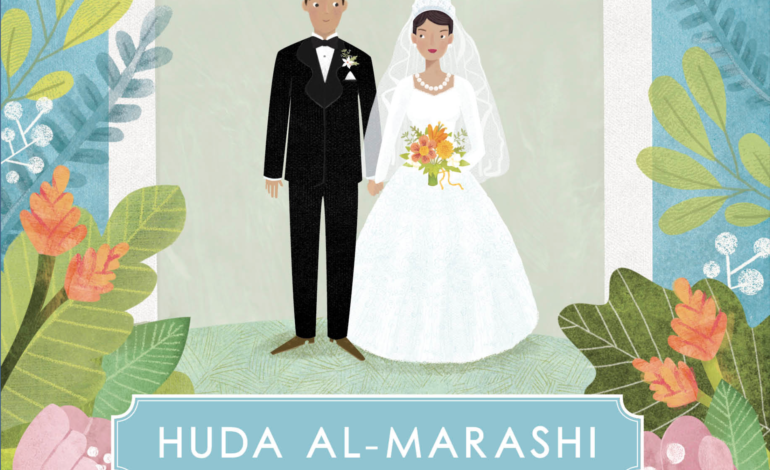 The book, which follows her story about her relationship with her husband of 22 years, was released last November. Al-Marashi told The AANews that when she first started thinking about writing the book in 2008, she didn’t see many love stories pertaining to Muslim or Arab American culture.

“When I started writing, everything around us was about global conflict, war or terrorism,” she said. “There wasn’t a place for young Muslims and Arabs to see themselves in a context removed from that.” She said some interviews she’s had about the book have misrepresented matchmaking in Muslim culture, even though the point of her memoir is to debunk stereotypes about arranged marriage.

“Still, some of the book reviews will summarize that I had an arranged marriage when I was 6 years old,” Al-Marashi said, “when the whole point of the story is just that I happened to meet my spouse when I was six, but I didn’t know we were going to get married then.

“There’s this pressure that you have to do it the Western way,” she added. “Arranged marriage is so stigmatized in the West. I wanted to complicate that story about it.”

According to a 2012 study by Statistic Brain, about 53 percent of marriages are arranged worldwide and about 6 percent of arranged marriages end in divorce.

“It’s much like anybody else who would be set up by friends or family in any context,” she said. “It’s not like that’s something unique to Middle Eastern culture that there are set-ups sometimes.”

She said children of immigrants grow up with a dichotomy between examples of love they see on television versus what they see at home. Al-Marashi said she believes her relationship with her husband is stronger because of how much they’ve shared through the years.

“We have a solid foundation based on our shared values, our community and our family’s longstanding friendship,” she said. “Now I’ve come to really value just how long I’ve had a relationship with him and also his parents. They feel truly like an extension of my own parents and they mean a lot to me.”

She said in her experience, love grew in a way that isn’t represented in mainstream media.

“I had that sense of security and comfort that I wouldn’t have known to call love,” she said. “But now I see is just one of the many shades of love. My love over the years has grown and deepened as any relationship would. Your respect for the person grows over time and you just get to know the person better.

“I think that’s something that doesn’t get celebrated enough in any culture,” she said.

Al-Marashi said she was very honest in her memoir about scenes in her life like her wedding night, because she saw the need for such an underrepresented voice.

“They were really hard for me to write,” she said. “But at the same time I knew that it was disingenuous to write a book about a newlywed couple and not address those themes.

“I’m writing about very personal aspects of my life,” she added. “There aren’t very many places where you can see the tension and complications that might come with your marriage being your first relationship. When I was first married I would have given anything to have seen a book that addressed the struggles unique to that circumstance.”

Al-Marashi visits theDetroit Public Library April 1 and the Arab American National Museum in Dearborn on June 9 to talk about her memoir.

“First Comes Marriage: My Not-So-Typical American Love Story” is available for purchase at Amazon, Barnes and Noble and other booksellers.