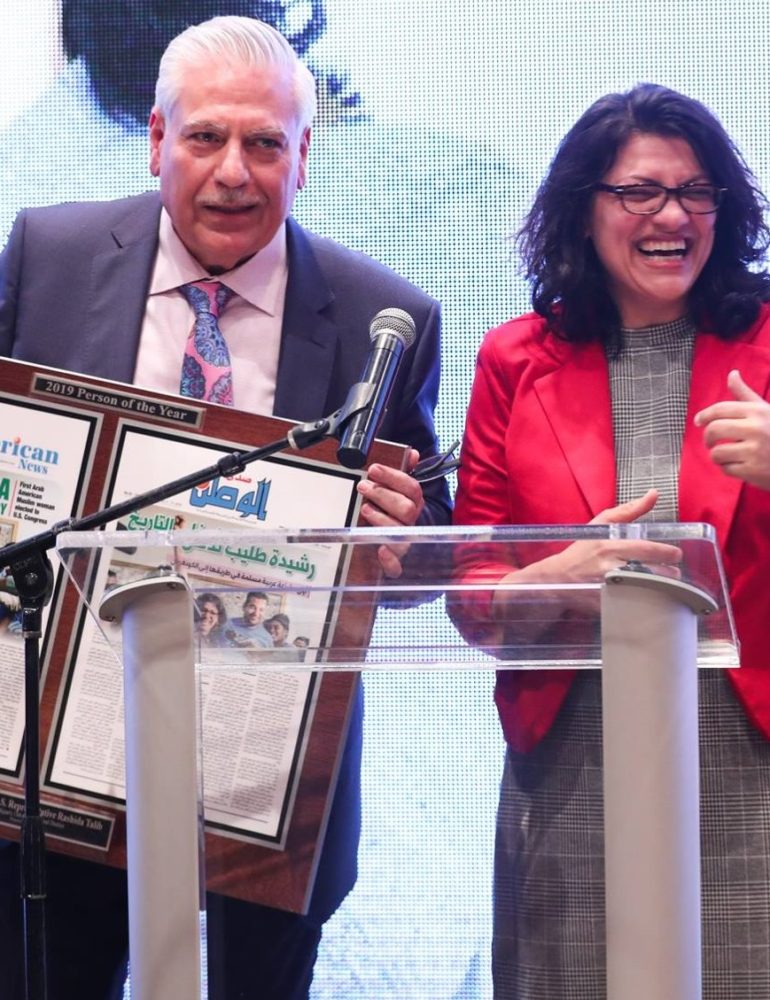 DEARBORN —The Arab American News has been in business for more than three decades, telling the stories of one of the most vibrant, successful and compelling communities in the United States; but until this past Friday it had never before named an official “Person of the Year.”

The inaugural award, which will become a new tradition for the paper going forward, was given to U.S. Rep. Rashida Tlaib (D-Detroit) at The Arab American News 35th anniversary Gala.

Tlaib was honored for her many years of speaking truth to power on behalf of all people, including Arab Americans, Muslims and other residents of the Metro Detroit area, as well as people in the Middle East, with her principled stances against the Israeli occupation of Palestinian lands.

“When they see Arabic writing on the wall they’re going to freak out; I can’t wait.”

Tlaib, 42, is a Palestinian American Muslim from Detroit who won her 13th District seat in the House of Representatives in a landslide vote last November. She and U.S. Rep. Ilhan Omar (D-MN), who was also elected in November, are the first two Muslim American women in the U.S. Congress.

Since her election, Tlaib has drawn the ire of the far right and other voices who have been taken aback by her bold, tell-it-like-is style, which has included speaking up about the American Israel Public Affairs Committee (AIPAC), Israel’s occupation and even calling for the impeachment of President Trump.

She has also maintained a strong connection with the Dearborn and Detroit communities, attending local events including a recent one at the Islamic Center of America mourning victims of the New Zealand terrorist attacks.

In her speech Tlaib said that the community gives her fuel to continue her mission on Capitol Hill.

“I want to thank each and every one of you for having my back,” she said, adding that she has been overjoyed to meet young Arab and Muslim girls with big aspirations because of her own example.

“I think growing up Arab in Metro Detroit is not like growing up anywhere else,” she said. “It’s so uniquely special; it actually makes us more courageous and more outspoken about who we are without changing anything about us, and trying to hide anything.”

“This one is special,” she said.

“The Arab American News named me person of the year at their 35th Anniversary celebration tonight,” she wrote. “The team at AAN has demonstrated courage and consistency in their journalism. Under the leadership of their publisher, Osama Siblani, the team has shown us what true freedom of the press can produce. Shukran! Thank you for all of your work in giving us a voice.”