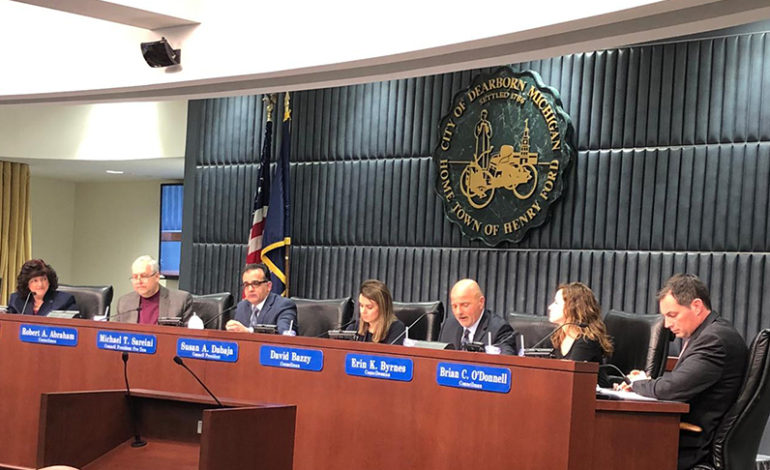 Dearborn City Council members during their meeting on Tuesday, March 26

DEARBORN — A group of local homeowners attended the Tuesday, March 26 City Council meeting here, sharing their long-running concerns that they’re being badly overtaxed on their homes and properties.

Together they delivered a letter to the mayor and City Council members, referencing the “unfair property taxes and assessments” and the “record high millage rates” that are quickly making Dearborn a less diverse and an “expensively” less attractive place to live in.

They also asked the city to address the “unfair high assessments of properties under construction, including new construction, additions and renovations.” Dr. Mazen El-Atrach, a member of the group, delivers the letter to the City Council

The group expressed concerns in the letter about “inconsistent discretionary subjectivity in assessments, especially in cases of larger homes.”
They also protested what they called “unfair assessments” and wanted to bring their grievances and the seriousness of this issue to the council members in an effort to address it head on. “I received several complaints about tax assessments last year and again this year,” said City Council Pro Tem Mike Sareini. “There is no question that the Council in its authority needs to have a meeting with the assessor to find out his methodology and assessing commercial properties as well as remodeled or new build homes.”

“When you look at one commercial apartment building that was increased by $500,000 in value with absolutely no improvements to it from the previous year, it definitely will raise questions that we need answers to,” Sareini told The AANews. Dr. Ali Berri, a longtime Dearborn resident, said that he wants to see the city flourish, as do the group’s other members.

He also said he believes that the city’s assessor should use his considerable discretionary powers to bring more people and business to Dearborn in order to increase its revenues, without overburdening the current residents with higher property taxes.

“We are not saying that we don’t want to pay taxes,” he said. “What we are saying is that we are being over-taxed.”

Dr. Marwan Shuayto told the Council members that he understands that millages are a factor in higher property taxes and that he also supported and voted for some of them. He added that he and many others believe their homes and commercial properties are over assessed, which is the key issue they brought before the Council.

Council President Susan Dabaja acknowledged the group’s concerns at the meeting, saying that while it’s not her area of expertise and not her job to tell assessors what to do, she does have fears that local homeowners both current and prospective may say “enough is enough.”

Kal Ibrahim, a member of the group, said at the meeting that he is paying more than $5,000 per month for property taxes, which is more than $60,000 per year. His house was assessed at $1.9 million and he wondered how the assessment was reached. He said that the cost to build his house was not even close to that figure. “This is unheard of, we are fed up and we are all desperate,” he said. “All we want is a fair assessment.”

Dabaja said she’s afraid the problem is becoming too debilitating to ignore for many homeowners.

“One of the fears I have is something you articulated,” she said. “People are buying now, building now, but when we tax and tax and tax are we going to reach a bubble where people are to say, ‘we’re done?’”

Further meetings with city officials are expected to take place, and the group may take its concerns to the state, although it would prefer to handle them with the city because of their belief that the taxes should be significantly lowered by the city.

The group also announced that a 12-member committee has been created to represent city residents with similar issues. The committee is working on an action plan and will have more information available at a later time.