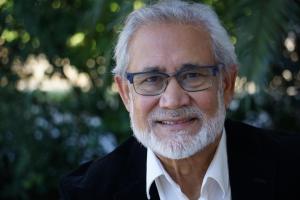 BLOOMFIELD HILLS — Muslim Americans in Metro Detroit have had their share of ups and downs in recent years due to Islamophobia and other challenges, but these times have also created leaders who have helped guide the community through difficult challenges.

Victor Ghalib Begg, who helped found the Muslim Unity Center Mosque here, is one of them. A retired entrepreneur and immigrant originally from India, Begg became one of the country’s leading spokesmen for the Muslim community, gaining notoriety through his appearances on several top media outlets including ABC, CBS, FOX, NPR, The Los Angeles Times and USA Today. He also won a 2009 Michiganian of the Year award from The Detroit News for his leadership and advocacy.

His own personal memoir, “Our Muslim Neighbors”, was released this past February and will be showcased as part of Begg’s upcoming nine-stop book tour in April.

In it, Begg details both his experiences in creating his and his family’s American Dream, as well as perhaps his biggest epiphany: That America’s greatest promise lies in building healthy communities with our neighbors.

Begg, who now lives in Florida, came to the Metro Detroit area in 1970 to focus on his studies, at a time when the Muslim community was far smaller than it is today.

As his American immigrant story began to take shape, he found himself more and more drawn to Islam, eventually founding the Unity Center Mosque, an ethnically diverse place of worship focusing on family, fun and fostering a tight knit community of Muslim Americans and their neighbors.

As Islamophobia began to take root in the U.S. due to outside perceptions, Begg said he became an “accidental activist.”

The rest was history.

“That’s one of the first chapters in the book,” he said. “From then on, things never stopped; I got involved with the community, built a mosque, my wife and I had kids.”

According to a 2015 survey from Georgetown University and the Bridge Initiative, 60 percent of Americans don’t personally know a single Muslim neighbor.

Begg’s book aims to fill the knowledge gap by presenting an authentic life story in book form that he says is “as exciting as a novel.”

Thus far, the book has received overwhelmingly positive reviews on Amazon.com (all 13 reviews of the paperback edition gave five stars), and widespread praise from fellow religious and community leaders.

“In one book, I have come to understand much more about Islam, its followers and its teachings,” Rabbi Bruce Benson writes in the book’s foreword.

“I’ve come to realize that the challenges Muslim immigrants have faced are similar to what Jews and many other immigrant groups have experienced as they tried to settle in America. By the end of this book, I hurt with Victor and I laugh with him, because — as Americans — we share so much. We are him. His journey is our journey. This is our story.”

While the current situation can seem depressing in light of the recent attacks on Muslim worshippers in New Zealand, and the growing culture of hate among the alt right in America, Begg remains optimistic that a different story can be told and a new future can happen on a person-to-person basis.

“Person by person, friend by friend, good-hearted people change the world,” Begg writes in the memoir.

“A lot of foggy information clouds the American brain concerning Muslims,” Michael Wolfe, a filmmaker and author of “One Thousand Roads to Mecca” wrote on OurMuslimNeighbors.com. “Victor’s representative story, his steady, 40-year love affair with America, blows much of it away.”

“This book’s importance really is global, considering how often migrants, refugees and Muslims in particular are demonized by extremists around the world,” said Larbi Mageri, a Muslim journalist based in Algeria and a co-founder of the International Association of Religion Journalists.

“One of the biggest challenges for Muslims who have never visited the U.S. is getting a clear sense of how Muslims live there in these turbulent times,” Mageri wrote in his review. “There are so many conflicting claims and stories about life in the U.S. Through reading Victor’s true stories, I was able to experience American life for Muslims — without ever leaving my home. The lasting impression I am left with, after reading Victor’s memoir, is that anyone would be lucky to have a Muslim neighbor like this living next door.”

Begg’s tour is expected to kick off on Friday, April 5 at noon at IONA Jumman Salat, 28630 Ryan Road in Warren. He will also be visiting several other Islamic centers and the Jewish Congregation Beth Ahm.

On Monday, April 8 at 6 p.m., Begg will be at the Arab American National Museum on Michigan Avenue in Dearborn. Full details about the tour can be found on his website, OurMuslimNeighbors.com.