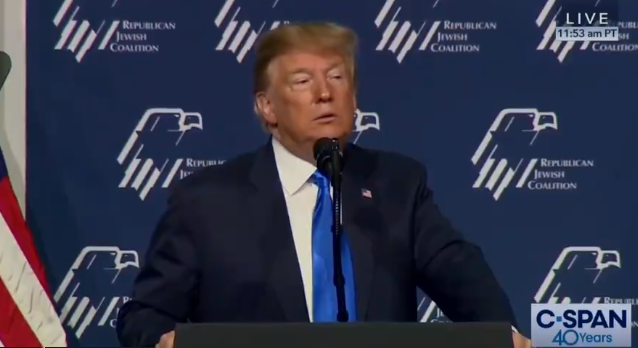 LAS VEGAS — President Trump had strong words for U.S. Democrats this past Saturday, including Minnesota Rep. Ilhan Omar, whom he called out just hours after it was revealed that a New York man had been arrested for threatening to kill the congresswoman.

“Democrats are advancing the most extreme partisan agenda by far in American history…people aren’t fighting for Israel in Congress,” Trump said during a speech at the Republican Jewish Coalition here, during which he seemed to refer to American Jews as if they were Israelis.

“If implemented, the Democrats’ radical agenda would destroy our economy, cripple our country and very well could leave Israel out there all by yourselves. Can’t do that.”

Trump also called out Omar for her own stance on Israel.

“Special thanks to Representative Omar of Minnesota,” he said. “Oh, I forgot. She doesn’t like Israel. I forgot. I’m so sorry.”

Trump’s comments on Omar came just hours after details emerged that a New York man who said he “loved” the president was charged with threatening to kill her.

The man, Patrick Carlineo, Jr., was arrested after placing a call to Omar’s office during which he called her a “terrorist” and threatened to shoot her, federal prosecutors said.

“Do you work for the Muslim Brotherhood? Why are you working for her, she’s a f**king terrorist? I’ll put a bullet in her f**king skull,” the 55-year-old man allegedly said, according to a report from The Independent.

According to a complaint filed by the U.S. Attorney’s Office in the Western District of New York, Carlineo allegedly said he “loves the president and he hates radical Muslims in our government.”

Omar made headlines earlier this year for implying that U.S. politicians support Israel because of lobbyists’ money.

She tweeted the following response to Trump’s latest comments: “My Lord, forgive my people for they do not know.”

With Israeli Prime Minister Benjamin Netanyahu set to face challenger Benny Gantz on Tuesday in the country’s election, Trump seemed to hint at his preferred candidate, referring to Netanyahu as “your prime minister” to the gathered audience of American Jews.

Trump also reportedly touted his decision to move the U.S. embassy to Jerusalem from Tel Aviv, as well as his recent controversial recognition of Israeli sovereignty over the Golan Heights.

Jewish Democratic Council of America executive director Halie Soifer denounced Trump’s comments, saying Trump’s policies and rhetoric are “antithetical to Jewish values” and that anti-Semitism has increased to unprecedented levels due to his “divisive words, policies and willful blindness.”

“We strongly denounce President Trump’s continued assault on decency and truth, as was evident in his speech earlier today before the Republican Jewish Coalition in Las Vegas,” Soifer said, adding that Trump’s comments in Las Vegas were a “shameful display of lies and arrogance.”