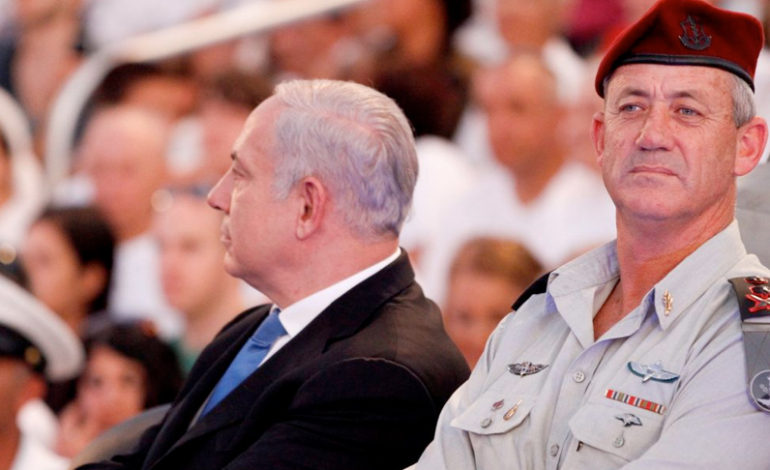 The Benjamins: Two sides of the same coin

Israeli elections have just concluded and the results indicate that Benjamin Netanyahu is set to win a fifth term as Israeli prime minister. The race between Netanyahu and his strongest challenger, Benjamin Gantz, who is a former chief of staff of the Israeli military forces, was very tight. But even if Gantz and his associated political parties had won, Palestinians would still gain nothing.

David Sheen, an independent Canadian-Israeli journalist, recently gave a talk about Israeli politics and Israeli public opinion at the Palestine Center. In his presentation, Sheen outlines the facts and realities of the Israeli public’s attitudes and how they correlate with the platforms of Israeli political parties.

Sheen uses an acronym — SIDE — to delineate four major political “camps” that Israeli voters belong to:

o Segregation — those who support a two-state solution.

o Integration — those who support one democratic state.

o Elimination — those who support a unitary state that is ethnically cleansed of Palestinians.

Sheen looks at public opinion polls of Israeli Jews conducted by Hebrew University in December of 2017. He shows how at first glance, it appears that around 45 percent of Israelis support a Palestinian state alongside Israel (these people would belong in the segregation camp). However, when asked whether they support Palestinian sovereignty over their airspace, land and water, and with Israeli early warning systems deployed in Palestinian territory for 15 years, support for two states drops to around 35 percent.

When these people are further asked whether they support a two-state solution where Israel annexes major settlement blocs but evacuates all other settlements, support drops again. When asked if they support East Jerusalem being the capital of a Palestinian state, Haram al-Sharif (Temple Mount) being under Palestinian sovereignty and allowing around 100,000 Palestinian refugees to return to their homeland with the rest of them to be compensated, support for such a two-state solution drops to under 20 percent.

Sheen notes that these conditions are already a huge compromise for Palestinians; and even if they were to gain most of the West Bank and Gaza in a Palestinian state, they would still only get less than a quarter of the land of historic Palestine. Yet, Israelis still oppose such a solution, even though they would get a far better deal than the Palestinians.

Sheen then sheds light on Israeli attitudes toward a one-state solution. Due to massive expansion of Israel’s illegal settlements, many observers already believe that the two-state solution is dead. When asked about their preference between one democratic state and one apartheid state, only a quarter of Israeli Jews prefer the democratic state. About two-thirds prefer either an apartheid or ethnically cleansed state.

Furthermore, when asked whether they agree or strongly agree that Jews deserve preferential treatment, around 79 percent of Israeli Jews agree. Nearly 48 percent believe that Palestinians should be expelled or transferred from Israel. As Sheen correctly points out, these numbers are depressing and frightening, to say the least.

Sheen also goes on to categorize the various Israeli parties into the four major political camps mentioned above. It turns out that power distribution of the parties nearly mirrors the survey results of the Israeli public. The camp with the most power in Israel is the domination camp and the second largest is the elimination camp.

He then addresses potential skepticism of why the Israeli Labor Party is classified under the domination camp. After all, the Labor Party is a supposedly progressive and social democratic party that claims to support the so-called peace process, whereas the Likud Party is clearly a right-wing party.

But as Sheen points out, it was the Labor Party that perpetrated the Nakba in 1948 and displaced hundreds of thousands of Palestinians and did not allow them to return to their homeland after the fighting. It is the same party that invaded and seized the West Bank, Gaza, the Sinai Peninsula and the Golan Heights in 1967. It is the same party that sponsored the Israeli settlement movement. Therefore, the Labor Party cannot be considered as a two-state supporter.

Sheen also addresses the question of whether there is hope that the younger Israeli generations could shift politics in a more progressive direction. Unfortunately, this is also unlikely. In 2016, Israel’s comptroller said the following about its state-sponsored education system:

“I will not gloss over the state of affairs; it shows a grim picture. The state of Israel is doing very little to purge the severe phenomena of racism and hatred among youth. Over…years…the Ministry of Education has avoided taking the necessary steps…for prevention of racism.”

In 2018, the Israeli Ministry of Education gave a lifetime achievement award to Moshe Zar. Decades before, he was arrested and convicted of participating in terrorist bombings targeting the Palestinian mayors of Nablus, Ramallah and Al-Bireh, yet was able to avoid a jail sentence. One of these mayors lost his legs in the attack.

Therefore, it is clear that regardless of who wins Israeli elections, the daily lives and political situation of Palestinians are unlikely to improve. After all, Benjamin Gantz, who is supposedly a “left-wing” politician, has said that many of Israel’s settlements in the West Bank will remain forever. He has also vowed to never withdraw from the Golan Heights. Under his command as a senior leader in the IDF, Israel killed hundreds of Palestinians. It seems that Israeli politics revolve around who is most likely to maintain the status quo of occupying and crushing Palestinians.

The facts and figures that David Sheen highlights about Israeli political parties and Israeli public opinion reinforce a cold reality: The Israeli public is not concerned with a just solution or compromise with Palestinians. As long as they can continue to dominate Palestinians, they are content. Otherwise, why is it that elected Israeli governments continue to inch closer to the right? After almost 72 years of oppression of Palestinians, why else is it that Israelis have not demanded that their state reach a fair resolution to the conflict? The truth is, most Israelis just do not want to.