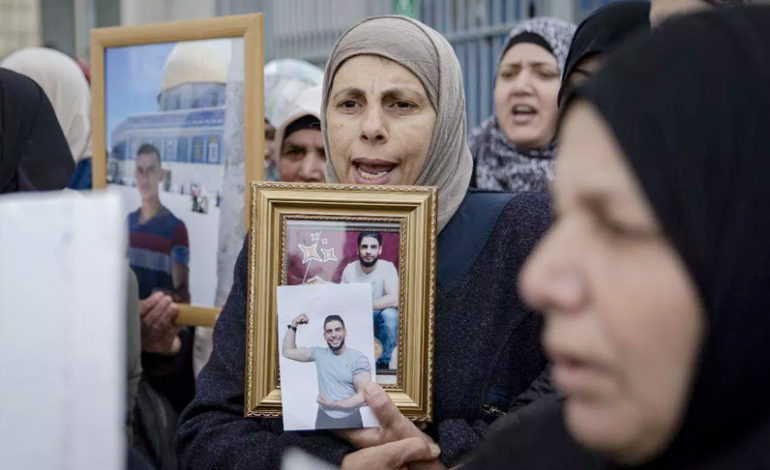 The current violence targeting Palestinian prisoners in Israeli jails dates back to January 2. It was then that Israel’s public security minister, Gilad Erdan, declared that the “party is over.”

“Every so often, infuriating pictures appear of cooking in the terrorist wings. This party is coming to an end,” Erdan was quoted in the Jerusalem Post.

Then, the so-called Erdan’s Committee recommended various measures aimed at ending the alleged “party”, which included placing limits on prisoners’ use of water, banning food preparations in cells and installing jamming devices to block the alleged use of smuggled cell phones.

The last measure in particular caused outrage among prisoners, for such devices have been linked to severe headaches, fainting and other long-term ailments.

Erdan followed his decision with a promise of the “use of all means in (Israel’s) disposal” to control any prisoners’ protests in response to the new restrictions.

The Israel Prison Service (IPS) “will continue to act with full force” against prison “riots”, he said, as reported by the Times of Israel.

That “full force” was carried out on January 20 at the Ofer Military Prison near Ramallah, in the West Bank, where a series of Israeli raids resulted in the wounding of more than 100 prisoners, many of whom sustaining bullet wounds.

The Nafha and Gilboa prisons were also targeted with the same violent pattern.

The raids continued, leading to more violence in the Naqab Prison on March 24, this time conducted by the IPS force, known as the Metzada unit.

Metzada is IPS’ “hostage rescue special operation” force and is known for its very violent tactics against prisoners. Its attack on Naqab resulted in the wounding of many prisoners, leaving two in critical condition. Palestinian prisoners fought back, reportedly stabbing two prison guards with sharp objects.

On March 25, more such raids were conducted, also by Metzada, which targeted Ramon, Gilboa, Nafha and Eshel prisons.

In response, the leadership of Palestinian prisoners adopted several measures, including the dismantling of the regulatory committees and any other form of representation of prisoners inside Israeli jails.

The decentralization of Palestinian action inside Israeli prisons would make it much more difficult for Israel to control the situation and would allow prisoners to use whichever form of resistance they may deem fit.

But why is Israel provoking such confrontations when Palestinian prisoners are already subjected to a most horrid existence and numerous violations of international law?

A most winning strategy for Israeli politicians during such times is usually increasing their hostility against Palestinians in the occupied territories, including the besieged Gaza Strip.

Indeed, a hate-fest involving many of Israel’s top candidates kicked in, some calling for war on Gaza, others for teaching Palestinians a lesson, annexing the West Bank and so on.

Merely a week after the election date announcement was made, raids of prisons began in earnest.

For Israel, it seemed like a fairly safe and controlled political experiment. Video footage of Israeli forces beating up hapless prisoners, accompanied by angry statements made by top Israeli officials, captured the imaginations of a decidedly right-wing, militant society.

And that’s precisely what took place, at first. However, on March 25, a flare in violence in Gaza led to a limited, undeclared war.

A full-fledged Israeli war on Gaza would be a big gamble during an election season, especially as recent events suggest that the time of easy wars is over. While Netanyahu adopted the role of the decisive leader, so determined to crush the Gaza resistance, his options on the ground are actually quite limited.

Even after Israel accepted Egyptian-mediated ceasefire terms with the Gaza factions, Netanyahu continued to talk tough.

“I can tell you we are prepared to do a lot more,” Netanyahu said in reference to the Israeli attack on Gaza during a video speech beamed to his supporters in Washington on March 26.

But, for once, he couldn’t, and that failure, from an Israeli viewpoint, intensified verbal attacks by his political rivals.

Netanyahu has “lost his grip on security,” the Blue and White party leader, Benny Gantz, proclaimed.

Gantz’s accusation was just another insult in an edifice of similar blistering attacks questioning Netanyahu’s ability to control Gaza.

In fact, a poll, conducted by the Israeli TV channel Kan on March 27, found that 53 percent of Israelis believe that Netanyahu’s response to the Gaza resistance is “too weak.”

Unable to counter with more violence, at least for now, the Netanyahu government responded by opening another battlefront, this time in Israeli prisons.

By targeting prisoners, especially those affiliated with certain Gaza factions, Netanyahu is hoping to send a message of strength, and to assure his nervous constituency of his prowess.

Aware of the Israeli strategy, Hamas’ political leader, Ismail Haniyeh, linked the ceasefire to the issue of prisoners.

We “are ready for all scenarios,” Haniyeh said in a statement.

In truth, the Netanyahu-Erdan war on Palestinian prisoners is foolish and unwinnable. It has been launched with the assumption that a war of this nature will have limited risks, since prisoners are, by definition, isolated and unable to fight back.

To the contrary, Palestinian prisoners have, without question, demonstrated their tenacity and ability to devise ways to resist the Israeli occupier throughout the years. But more importantly, these prisoners are far from being isolated.

In fact, the nearly 6,000 Palestinian prisoners in Israeli jails represent whatever semblance of unity among Palestinians that transcends factions, politics and ideology.

Considering the direct impact of the situation in Israeli prisons on the collective psyche of all Palestinians, any more reckless steps by Netanyahu, Erdan and their IPS goons will soon result in greater collective resistance, a struggle that Israel cannot easily suppress.