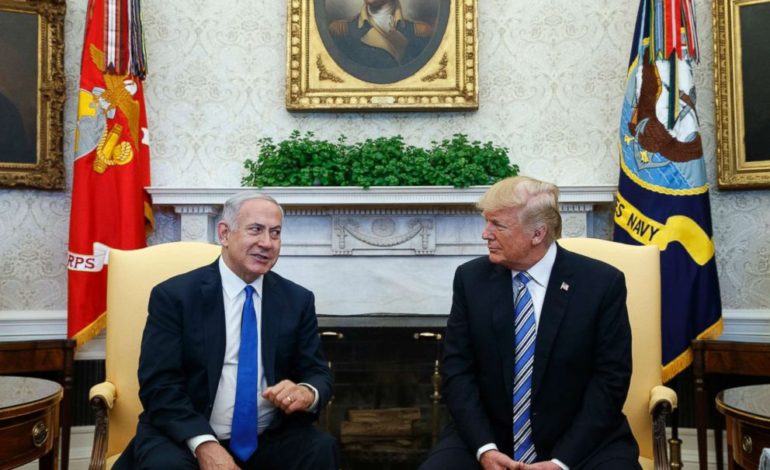 WASHINGTON, DC — President Trump phoned Israeli Prime Minister Benjamin Netanyahu on Wednesday to congratulate him on his re-election, and Netanyahu said he thanked his ally for “tremendous support for Israel.”

Netanyahu tweeted that Trump had called him from Air Force One. The president was on a flight to Texas.

Netanyahu secured a clear path to re-election on Wednesday, and a record fifth term in office, with religious-rightist parties set to hand him a parliamentary majority, despite a close contest against his main centrist challenger.

“Trump warmly congratulated (me) and the Israeli people,” Netanyahu tweeted.

“(I) thanked President Trump for his tremendous support for Israel, including recognition of Jerusalem and the Golan,” he said.

Trump said in a tweet he congratulated Netanyahu on “a great and hard-fought win.”

“The United States is with him and the People of Israel all the way!” he said. Netanyahu said that, in the telephone call, he also thanked Trump for designating Iran’s elite Islamic Revolutionary Guard Corps as a terrorist organization on Monday.

In remarks to reporters at the White House, Trump said Netanyahu’s re-election improved the chances of peace between Israel and the Palestinians.

“Everybody says you can’t have peace in the Middle East, with Israel and the Palestinians,” Trump told reporters at the White House.

“I think we have a chance. I think we have now a better chance with Bibi having won,” he said, referring to Netanyahu, who leads the conservative Likud party, by his nickname.

“He’s been a great ally and he’s a friend,” Trump said. “I’d like to congratulate him on a well-thought-out race.”

A team led by Trump’s adviser and son-in-law Jared Kushner has been working on an Israeli-Palestinian peace plan, but has not disclosed details.

Palestinian chief negotiator Saeb Erekat said that, “Israelis have voted to preserve the status quo. They have said ‘no’ to peace and ‘yes’ to the occupation.”

The Palestinians demand a full return to the borders that existed before the 1967 war when Israel seized the West Bank, including East Jerusalem and the Gaza Strip.

Netanyahu said on Saturday that he would annex Israeli settlements in the occupied West Bank if he won another term in office.

The last round of U.S.-brokered peace talks between Israel and the Palestinians collapsed in 2014.