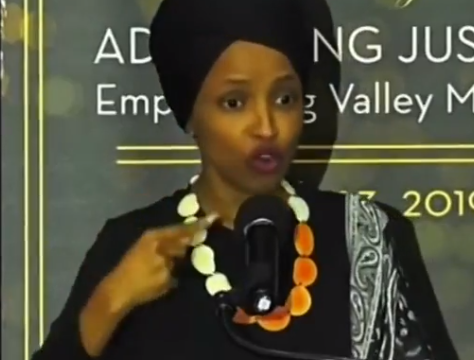 A day after President Trump tweeted what many are calling an inciteful and “disgusting” video linking Minnesota State Rep. Ilhan Omar to the 9/11 attacks, Democratic colleagues have spoken out against the president in defense of Omar, accusing Trump of endangering her safety.

“My sister in service @IlhanMN is on my heart tonight,” said her 2018 congressional colleague Ayanna Presley of Massachusetts in a tweet.

“The occupant of the @WhiteHouse is putting her, her family, her team & Muslim Americans across the country in jeopardy. It’s unconscionable and I’m furious #IstandWithIlhan.”

Trump’s video was posted Friday afternoon and includes clips of Omar stating “some people did something” in reference to the 9/11 attacks interspersed with clips of the attacks on the World Trade Center towers.

“WE WILL NEVER FORGET!” Trump’s caption on the video reads.

The video has been viewed more than 7.5 million times since its posting, and has been pinned to the top of the president’s Twitter timeline.

WE WILL NEVER FORGET! pic.twitter.com/VxrGFRFeJM

The video was posted in response to a speech from Omar at a Council on American-Islamic Relations (CAIR) banquet in California last month during which Omar said the following: “CAIR was founded after 9/11 because they recognized that some people did something and that all of us were starting to lose access to our civil liberties.”

A spokesperson for Omar has since said that the congresswoman misspoke, as the CAIR organization was founded in 1994. It has doubled in size since the attacks, however, according to a report from Business Insider.

This is not the first time Trump has targeted Omar, who became the first Muslim American woman to serve in Congress along with her colleague Rashida Tlaib, a fellow Democrat from Michigan.

In February, he called on Omar to resign over her comments on AIPAC and its lobbying influence on creating support for Israel. He also called her out over her lack of support for Israel last Saturday shortly after Omar said she had received death threats.

Fears for Omar’s safety have surfaced yet again, leading several of her colleagues to speak out in support and to condemn Trump for the video post.

“As a Senator who represents 9/11 victims, I can’t accept any minimizing of that pain. But Trump’s dangerous rhetoric against Ilhan Omar is disgusting,” wrote Democratic senator Kirsten Gillibrand of New York on Facebook. “It’s a false choice to suggest we can’t fight terrorism and reject Islamophobic hate at once — a president should do both.”

On Friday, Omar responded to the controversy by tweeting words from former president George W. Bush in the days after the attack.

“The people — and the people who knocked these buildings down will hear all of us soon,” Bush said.

“Was Bush downplaying the terrorist attack,” Omar tweeted. “What if he was a Muslim?”

Omar’s colleague in the House Alexandria Ocasio-Cortez also spoke out against Trump’s post.

“We are getting to the level where this is an incitement of violence against progressive women of color and if they can’t figure out how to get it back to policy we need to call it out for what it is because this is not normal and this is not a normal level of political debate or rhetoric,” she said.

Both Omar and Ocasio-Cortez have reported receiving death threats according to The Independent.

Tlaib also spoke up on Twitter for Omar, as did former Presidential candidate Bernie Sanders among other political leaders.

“Enough is enough. No more silence, with NY Post and now Trump taking Ilhan’s words out of context to incite violence toward her, it’s time for more Dems to speak up,” Tlaib said, referencing the Post’s cover story this week showing a picture of the Twin Towers with the headline “Here’s Your Something.”

“Clearly the GOP is fine with this shameful stunt, but we cannot stand by,” Tlaib added.

She also retweeted the a Bernie Sanders post, which came hours after Trump’s.

“Ilhan Omar is a leader with strength and courage,” Sanders said. “She won’t back down to Trump’s racism and hate, and neither will we. The disgusting and dangerous attacks against her must end.”

Not all of her fellow Democrats have come to her aid, however.

Democratic Rep. Max Rose, a retired U.S. Army soldier who was deployed to Afghanistan and received injuries in 2013, and has spoken out against Islamophobia in the past, said he disagreed with Omar’s characterization of the attacks, calling them “insensitive.”

Omar, in a series of tweets Saturday, refused to back down to Trump and reiterated her commitment.

No one person – no matter how corrupt, inept, or vicious – can threaten my unwavering love for America. I stand undeterred to continue fighting for equal opportunity in our pursuit of happiness for all Americans.

“Thank you for standing with me – against an administration that ran on banning Muslims from this country – to fight for the America we all deserve,” she added.