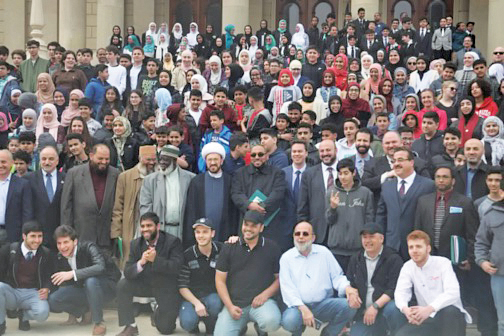 LANSING — The Michigan Muslim Community Council (MMCC) hosted the nineth annual Michigan Muslim Capitol Day on Wednesday April 17, from 9 a.m. to 3 p.m. at the State Capitol.
Hundreds from the Michigan Muslim community across the state attended the event and met their elected representatives.
As a historic number of Muslims are either elected or are running for office, MMCC saw this as an opportunity to further political and civic engagement by Muslims.
According to a MMCC press release, “Muslim Capitol Day seeks to further empower citizens to find ways they can improve their local communities and make their voices heard.”
The Capitol Day was a non-partisan event that featured welcome speeches from Governor Whitmer and Lieutenant Gov. Garlin Gilchrist III. Workshops centered around promoting social justice, public safety in places of worship and schools, engaging elected officials, fighting bullying, recognizing mental health disease and intervening for substance abuse.
“We are honored that the elected leaders of our state welcome our community to Lansing,” MMCC Chairperson Dr. Mahmoud Al-Hadidi said. “Their commitment to inclusivity and justice and to make Michigan the best state in the nation will inspire many to become active citizens who can make a positive difference in their own localities.”
The MMCC makes aiding and improving the local community one of its priorities. In recent years it coordinated a meal program for hundreds of federal employees during the federal shutdown. It collected and distributed more than 150,000 lbs of food last year and distributed a $100,000 check to help Detroit residents pay their water utility bills.
It also delivered more than 1,000,000 bottles of water for Flint residents and joined Jewish and Christian partners in volunteering at dozens of locations across the state in the past year.
More information about the organization can be found at www.mimuslimcouncil.org