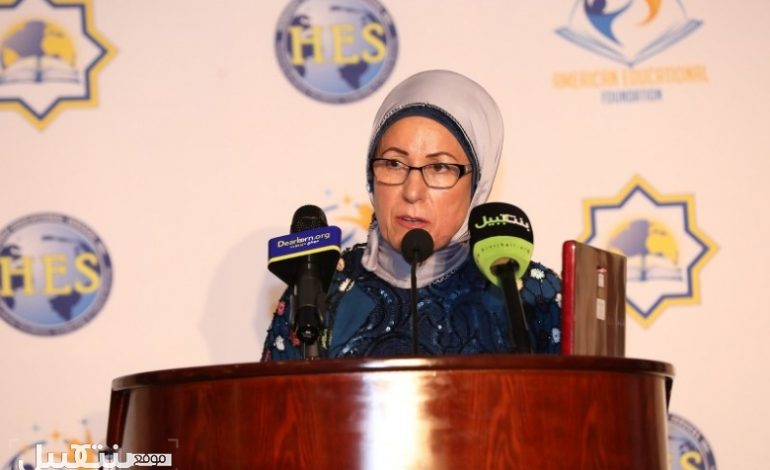 HES founder and Superintendent Nawal Hamadeh -Photo by The AANews

DEARBORN HEIGHTS — The American Educational Foundation (AEF) held its second annual awards gala on Thursday, April 19, at the Bellagio Banquet in Dearborn Heights, inviting hundreds of business and community officials and future student leaders for a celebration of community and scholarship.

Current students, graduates and other community members gathered with one goal: To make it more affordable for the students graduating from HES’ four academies to achieve higher education.

“No one should be denied access to an education based on their ability to pay for a college degree,” said Nawal Hamadeh, AEF founder and superintendent of HES. “Education is the password for the future and it’s important to fund every qualified student for their accomplishments.”

Students who have already received letters of admission from universities or colleges were awarded a combined $29,000 in scholarships at the gala.

The two scholarship categories were a $1,000 gold and a $500 silver award. Criteria included GPA scores, clean disciplinary records and an essay about how the students would incorporate HES’ pillars: Scholarship, community, culture and character.

The AEF also recognized cornerstone members who contributed to its progress. Those include Dr. Nassib Ned Fawaz, founder and CEO of Energy International Corporation (EIC), Anna Amato, an educator and social worker who has been in the field of education for more than 30 years, and Maysaa Ouza, SIA alumni and a U.S. Air Force JAG Corps attorney.

“My career and success have been influenced by my teachers and mentors who have helped me become a better student, a better learner and a better citizen,” Ouza said.

Bilqis Abdul-Qaadir, the evening’s keynote speaker, a Muslim American and former Women’s collegiate basketball player for the University of Memphis, gave a few words of wisdom to students and parents about the certainty of reaching great heights when enough effort is applied.

Living in a Muslim household, she began wearing the hijab and practiced modestly on the court by covering all her skin except for her hands.

Her goal was to continue playing basketball professionally in Europe, but that quickly ended due to the International Basketball Federation (FIBA) rule prohibiting her headgear larger than five inches.

Unwilling to stray her beliefs, Abdul-Qaadir chose her faith and became an advocate working alongside other Muslim players.

“People were tagging me on social media,” She said. “Girls just like me dressed in basketball gear. That’s when I knew that I am not doing this only for myself. If I don’t move this ban against the hijab (to play basketball), then somebody else will struggle with it.”