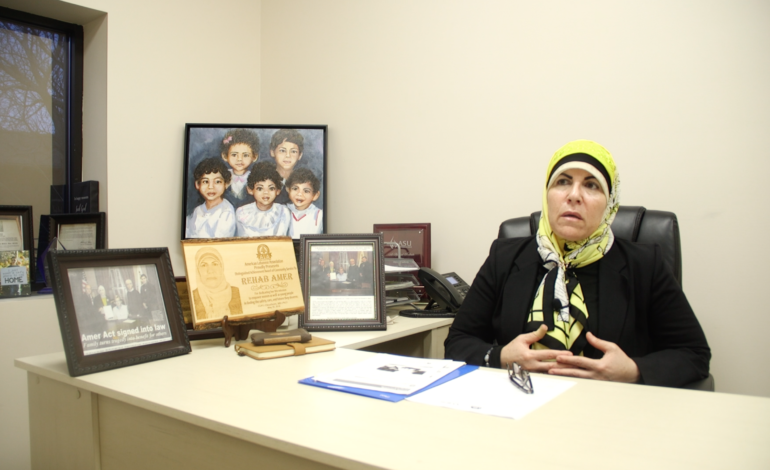 Dearborn – The story of Rehab Amer and her husband Ahmad’s struggle to keep their children is known to many. After decades of legal battles, and eventual successes bringing the Amer Law to the state of Michigan in 2010, Amer and her community partners want to inject hope and self-determination into families across the nation.

Rehab Amer has been busy working towards building a strong non-profit organization that protects children and empowers parents.

According to the organization’s website, AMER, or American Muslim Empowerment Resources, will provide, “services and preventative resources, family judicial advocacy and developing of legislative initiatives for children and families in need.”

The AANews met with Amer and board member Hussein Siblini at New Yasmeen Bakery last week to discuss their important work of keeping families united and preventing children from being put into the foster care system where they could go through unchecked abuse or trauma.

Amer’s work, like the law she helped enact, seeks to bring cultural and religious sensitivity back into common sense childcare decisions made by the state and local authorities. More importantly, she has been actively working to advocate for families and ensure that Amer law is observed in judicial proceedings in foster care cases.

“I am a nurse and I left my job after hearing of the overwhelming need, from the community and from outside of it, for someone to be there for them during a potential child separation procedure,” Amer said.

“Our work is even more important when it comes to refugees, who may not speak the language,” she added. “If such a family comes (to this country) with seven or eight children and just one of them gets involved in the protective services system, the state will automatically want to remove all other children as well.”

Amer and her colleagues have a variety of strategies in place to prevent such summary removals and separations. The first of these is seeking out potentially risky family environments, especially in immigrant and refugee homes where cultural norms can be misinterpreted by state authorities as hazardous for children.

“There is a cultural barrier when it comes to these cases,” Siblini said. “A lack of knowledge on the part of Child Protective Services of cultural practices can lead to unfair judgments and child care assessments.”

Amer has personally intervened in several such cases and has helped bring welfare services and much needed resources to families who have had children taken from them, so that they do not face the same threat with the rest of their children.

In cases where children are to be put into foster care, Amer advocates for the next of kin or Muslim foster parents to take the child, following the Amer law.

“There is a need for more Muslim foster parents to be licensed,” she said. “I took the orientation through an approved agency myself in order to be licensed. We need others in the community to be there for those children who become wards of the state and do not have a Muslim next of kin that can foster the child.

“I currently have a 6-year-old in my care,” she added. “The importance of having a safe and fit family for a child can make a tremendous difference in his or her emotional life.”

Reflecting on her work, Amer noted that the legal procedure in these cases is often rushed.

“In my interventions I make sure the interpreter to refugee parents is communicating information accurately,” she said. “In some instances, we found that case workers did not inform the court that the family had relatives willing to take care of the child. I make sure to bring these relatives to court so that the judge can see the entire picture.”

Last February, U.S. Rep. Debbie Dingell (D-Dearborn) introduced HR 4990, the Rehab and Ahmed Amer Foster Care Improvement Act of 2018. The legislation would require state foster care programs nationwide to ensure children are prioritized for placement with their relatives and puts additional requirements in place for a fairer decision-making process when an agency places a child.

Additionally, the legislation would require states to establish procedures that would allow any of the parties who receive notice of the placement decision to request, within five days after receipt of the notice, documentation explaining the reasons for the state’s decision.

It would also allow the child’s attorney to petition the court to review the decision and require that the court commence a review within seven days after receipt of the petition.

“This legislation needs nationwide support to pass,” Amer said. “I am urging the community to reach out to their state representatives and request their support by cosponsoring the bill with Congresswoman Dingell.” The AMER Foundation is currently in the process of getting licensed to become an approved foster care agency. Amer also plans to grow the non-profit to expand its advocacy operations nationwide.

“We need the assistance and support of our community in order to make this vision a reality,” she said. “I would ask all parents, Muslim or not, to look into their hearts and see that the child’s best interest is to keep them close to their loved ones. I invite others to advocate with me in court, provide much needed resources to refugee parents and families and donate to the AMER Foundations mission to empower families.”

Donations and khums can be made at //www.amerfostercare.org/donate.html