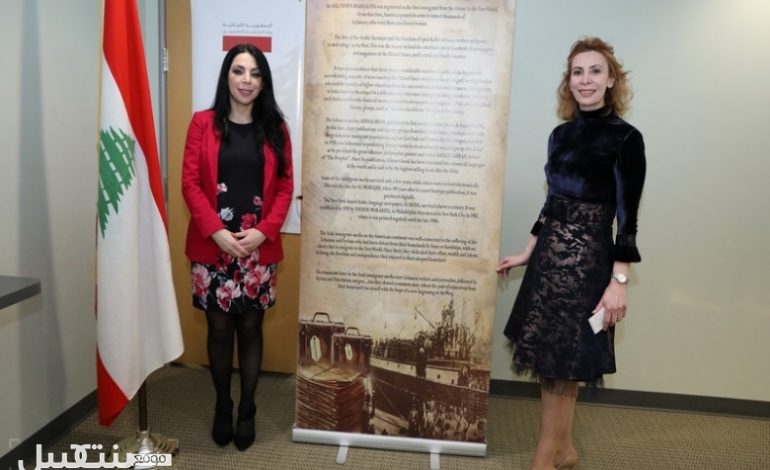 DETROIT – On Friday, April 12, the Lebanese Consulate in Detroit hosted an exhibition featuring journalists’ works entitled “From Peddling to Prophecy.” It was organized by U.N. journalist Samar Nader in collaboration with the two universities in Lebanon — The Holy Spirit and the Lady of Luiza.

The exhibition was held at the Lebanese Consulate in Southfield in the presence of many community members, in light of the Michigan Legislative Council’s announcement that celebrates April as Arab American Heritage Month.

The exhibition, which included documents and pictures of newspapers more than a century old, was opened by Consul General Suzan Mouzi Yassine in a speech that discussed the role of immigrants and their contributions that create a bridge between the East and the West.

“The first immigrants were mostly from Lebanon, Syria and Palestine and migrated in search of better opportunities for life,” Mouzi Yassine said. “Most of them were street vendors, some of whom worked in the field of agriculture and industry; and some of them helped build culture through writing, which contributed to the preservation of the Arabic language and identity.

“Before 1980, 135 Arab newspapers were published,” she added. The first was called “Planet America” ​​and was published in 1892. The first magazine was called “Arts” (1913) and published a broadsheet section, while Abdul-Masih Haddad was a magnet for a group of writers in contribution to journalism.

“Be proud that you have legendary writers like Gibran Khalil Gibran,” she told the audience. “I am proud to be associated with this humanitarian message.”

In her speech, Nader spoke about the exhibition and its works in archiving the history of the press and literature in collaboration with the Universities of the Holy Spirit of Kaslik and Lady of Luiza.

In 2005, the Museum of Lebanon and Immigration was opened.

The Phoenix Center for Lebanese Studies at the University of the Holy Spirit includes many of the paintings drawn by Lebanese immigrants.

The center sought to communicate with immigrants and obtain material that chronicled their journey from Lebanon to the wider world.

Also speaking at the opening of the exhibition was the publisher of The AANews, Osama Siblani, who was featured for his contributions to the community by embracing Arab American issues and the paper’s preservation of Arab identity.

Siblani stressed that the The AANews continues to play the role of the bridge between the motherland and expatriates in Arabic and English, since its establishment 35 years ago.

Professor Matthew Steffler, director of research and content at the Arab American National Museum in Dearborn, spoke about the experience of the museum as an entity dedicated to Arab history and culture and discussed the history of Lebanese emigration to the United States.

The audience toured the exhibition with the music of the oud player Ziad Nasr, who performed pieces called “Fairuziat.”

The exhibition, which was held for the first time at the U.N. headquarters in New York in January, included documents collected over the last eight years that focusing on the Lebanese and Arab press. It also included photographs of newspapers that were published more than a century ago.

The exhibition also included information on several newspapers and magazines, including “The Arts” and “The Tourist”, and other information on immigrants.

Publisher Elia Abu Madi, who was in charge of “Arabs in America Magazine”, was also featured in the exhibition. That magazine ceased publication in 1957.

The book dealt with the customs and social traditions that prevailed in the early twentieth century: Freedom, ignorance and science and the disparities in the outlook on human beings between Arab and Western societies.