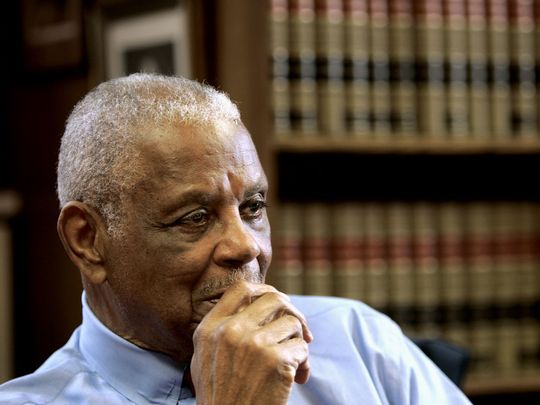 Keith, a grandson of slaves whose judicial career spanned five decades and 10 presidents, decided cases from school desegregation to government surveillance of citizens.

“His whole body of work as a jurist is inspiring to anybody,” said Chief Judge Denise Page Hood of the U.S. District Court for the Eastern Division of Michigan.

One of Keith’s rulings, in 1970, led to the busing of students in the Pontiac schools to racially desegregate the district, sparking a backlash.

Keith recalled receiving death threats, and the year after his decision, 10 Pontiac school buses were firebombed by members of the local Ku Klux Klan.

Keith also ordered the U.S. government, under President Richard Nixon, to stop wiretapping defendants without judicial approval in a case involving the anti-war group the White Panthers and the bombing of a CIA building in Ann Arbor.

In 2002, Keith rebuked the George W. Bush White House in a post-Sept. 11 decision ordering that “special interest” hearings in deportation cases be open to the public. Before the ruling, some 700 deportation cases had been heard behind closed doors, according to the federal government.

“The wiretap case can be seen as one of the first real cases involving things that need to be transparent to the extent that they can be,” Hood said, citing a famous quote from one of Keith’s rulings: “Democracies die behind closed doors.”