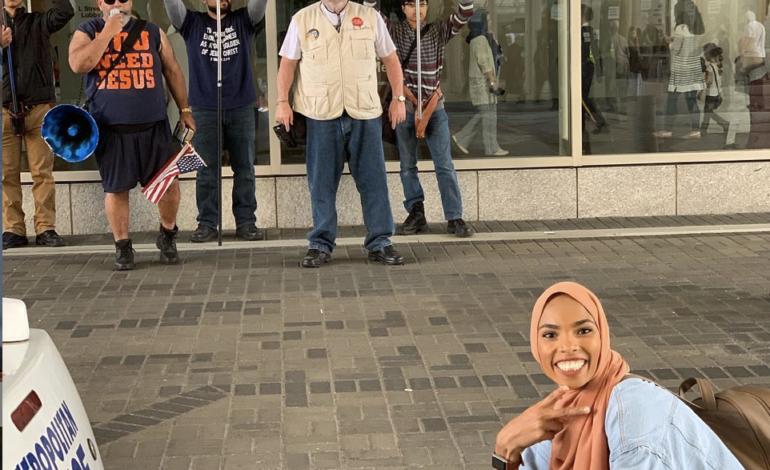 WASHINGTON D.C.  — Shaymaa Ismaa’eel, a 24-year-old behavioral therapist on the east coast, posed Saturday April 20 in front of anti-Muslim protesters outside the Islamic Circle of North America convention she attended.

Ismaa’eel said when she first saw the protesters she didn’t want to have anything to do with them.

“At most I thought I might film them,” she told the AANews.

“You could see them and their signs from the windows and you could hear everything they said from inside before you even get outside,” Ismaa’eel said. “They were saying things like ‘You should be ashamed of yourselves bringing your kids to something like this,’ but this is specifically for them.

“Throughout the workshops I was thinking about [the protesters,]” she said. “What if they heard what we’re listening to right now? Why don’t they see what’s going on? Everything is so peaceful.”

She said she’s taken pictures like this one before, but somehow this one gained more attention.

She said the online response to her picture seems “crazy.”

“I’ve gotten so much positivity from this,” she said. “I couldn’t possibly have ever imagined this. People have too me how seeing the picture encouraged them.”

“Wearing Hijabs in Ameruca, or anywhere can be really hard,” she said. “Being able to embrace your own identity or religion without being scared is the more important thing.”

She said she didn’t end up conversing with any of the protesters but she felt she needed to “keep it moving,” and address the protesters with a smile.

Ismaa’eel said she noticed some teenagers attending the event earlier approaching the protesters with negativity.

“We don’t want to be negative and show them those emotions,” she said. “No one really went that close to them. I think I was one of the only people near their area. Everyone else was on the sidelines.”

Ismaa’eel said she felt that the protesters wouldn’t hear her in this setting.

“The smile on my face was what I wanted them to see,” she said. “So this was the perfect time to take a picture and add to the collection.”

“I’m just being myself,” Ismaa’eel said. “I didn’t really care what their opinions were because they don’t even understand whats going on, on the inside.

“Kindness always leaves a mark,” she said. “You can remember people from long ago and what you remember is their kindness.”