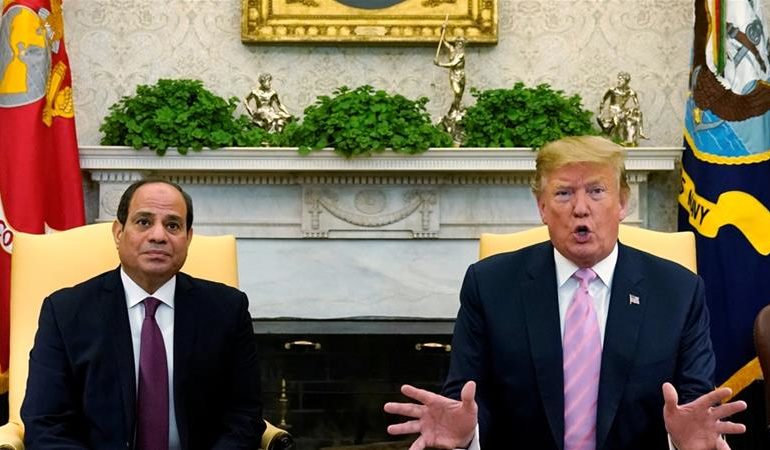 WASHINGTON, D.C. — President Trump is working to designate the Muslim Brotherhood a foreign terrorist organization, the White House said on Tuesday, which would bring sanctions against Egypt’s oldest Islamist movement.

“The president has consulted with his national security team and leaders in the region who share his concern and this designation is working its way through the internal process,” White House press secretary Sarah Sanders said in an email.

Egyptian President Abdel Fattah Sisi asked Trump to make the designation, which Egypt has already done, in a private meeting during a visit to Washington on April 9, a senior U.S. official said, confirming a report in the New York Times on Tuesday.

After the meeting, Trump praised Sisi as a “great president” while a bipartisan group of U.S. lawmakers raised concerns about Sisi’s record on human rights, efforts to keep him in office for many years and planned Russian arms purchases.

Sisi, who ousted the democratically elected President Mohamed Mursi, a leading member of the Muslim Brotherhood in 2013 and was elected president the following year, has overseen a crackdown on Islamists as well as liberal opposition in Egypt.

The proposal to declare the group a terrorist organization set off a debate within Trump’s national security team, the senior U.S. official said.

White House national security adviser John Bolton and Secretary of State Mike Pompeo support the designation but officials at the Pentagon and elsewhere have been opposed and want more limited action, the senior official said.

The Brotherhood, which estimates its membership at up to 1 million people, came to power in Egypt’s first modern free election in 2012, a year after long-serving autocrat Hosni Mubarak was toppled in a popular uprising. But the movement is now banned and thousands of its supporters and much of its leadership have been jailed.

Daniel Benjamin, former State Department coordinator for counterterrorism who now teaches at Dartmouth College, called the move mystifying. He said the State Department had considered the designation in 2017 but came to the conclusion there was no basis for doing so.

Benjamin said domestic political consideration could be at play with Trump facing re-election in 2020. “There is no question that there has been an effort to meet the appetites of Trump’s very Islamophobic base,” he said.

The Egyptian government blamed the Muslim Brotherhood organization for a 2013 suicide bombing at a police station that killed 16 people. The Brotherhood condemned that attack and denies using violence.

Some conservative and anti-Muslim activists have argued for years that the Brotherhood, which was founded in Egypt in 1928 and sought to establish a worldwide Islamic caliphate by peaceful means, has been a breeding ground for terrorists.

Giving the Muslim Brotherhood a terrorist designation could complicate Washington’s relationship with NATO ally Turkey. The organization has close ties with President Tayyip Erdogan’s ruling AK Party and many of its members fled to Turkey after the group’s activities were banned in Egypt.

The U.S. administration debated the terrorist designation for the Muslim Brotherhood shortly after Trump took office in January 2017.