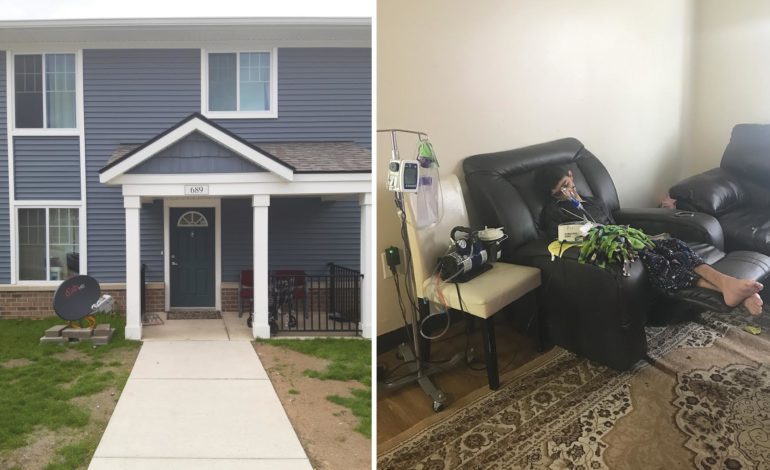 ANN ARBOR — An Arab American family has obtained a wheelchair accessible townhome for their son and brother, Haitham Breadiy.

Doctors diagnosed Haitham with Lafora body disease in April 2017. The family saw his condition deteriorate in a period of about three months as he lost the ability to walk or speak in complete sentences.

In January, 17-year-old Haitham had surgery to implant a vagus nerve stimulation device, which sends mild pulses of electronic energy to the brain to lessen seizure activity.

“I’ve been able to take him off two of his medications,” she said. “He’s not having consistent seizures; he does have good times and bad times, but it’s helping him.”

She said the move to the wheelchair accessible home was a game changer for the family.

“The move has been great,” she said. “It’s great to have some relief with the wheelchair accessible home.”

Kasham said the family was on a waiting list for two years to get into the wheelchair accessible home.

“It was a very long wait,” she said. “But it’s very helpful to not have to carry him upstairs and to be accessible to come and go from the house. It makes the biggest difference in his life. His depression has gotten so much better.”

“He can’t empty out his bladder all the way,” she said. “That makes him more open to infections. He’s been having a lot of kidney stones.”

Haitham was admitted into the intensive care unit at the University of Michigan’s Michigan Medicine health care complex on Tuesday evening for pneumonia in his left lung.

“He’s completely out of it and he can’t breathe,” Kasham said from the hospital Tuesday.

Haitham was discharged from the hospital Wednesday evening, but Kasham said he is still very sick.

A clinical trial for Lafora disease is still in development at UCLA, where Kasham hopes to bring the whole family for testing.

Kasham said her other children, 13-year-old Sophie and 2-year-old Thayer, are at a 25 percent risk of carrying the Lafora gene.

“I need my kids to see the doctors at UCLA,” she said. “Then, if they are affected, they’ll have a treatment option faster than Haitham did.

“This disease has just brought so many problems to our lives,” she added. “It just hurts so much.”

Kasham has previously told the AANews she hopes to someday open a foundation for rare diseases like Lafora.

As the sole care provider for her son and younger children, Kasham no longer works. Her husband, Elayyan Breadiy, who is recently in remission from Hodkins lymphoma, works full-time as a janitor for the University of Michigan.

The family is struggling to raise enough money to travel to UCLA for testing for Haitham and the other children.