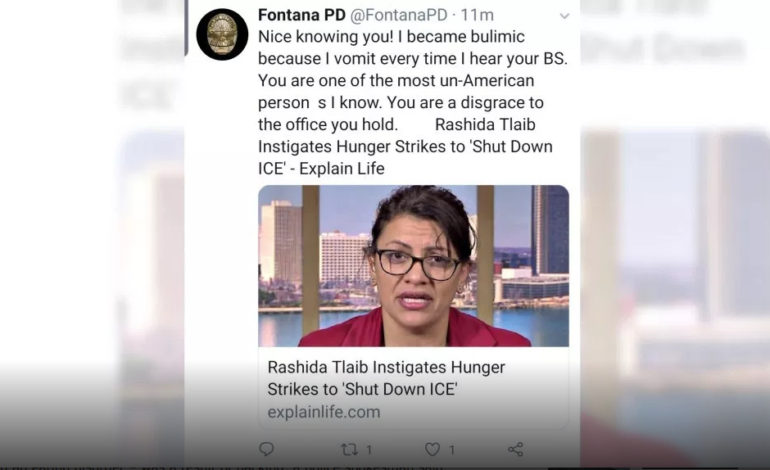 The now-deleted tweet from the police department was posted last week by an off-duty employee.

“Nice knowing you!” the tweet read, according to the Inland Valley Daily Bulletin in California. “I became bulimic because I vomit every time I hear your BS. You are one of the most un-American persons I know. You are a disgrace to the office you hold.”

The police department later posted a statement on Twitter apologizing and saying the previous tweet did not reflect the department’s values.

“This careless act does not reflect the values of the men and women that honorably serve our community,” the statement read.

The department first blamed the incident on a hacker in its social media account. The Council on American-Islamic Relations’ Los Angeles Office (CAIR-LA) criticized the police department for the deleted tweet about Tlaib and called on the department and the Fontana City Council to conduct and publicize an investigation into the matter.

Police said a personnel investigation has been initiated and actions will be followed in accordance with the Public Safety Officers Procedural Bill of Rights Act.

“We condemn the tweet sent out by the Fontana Police Department attacking a member of Congress with such hate and vitriol,” CAIR-LA Executive Director Hussam Ayloush said in a statement Wednesday.