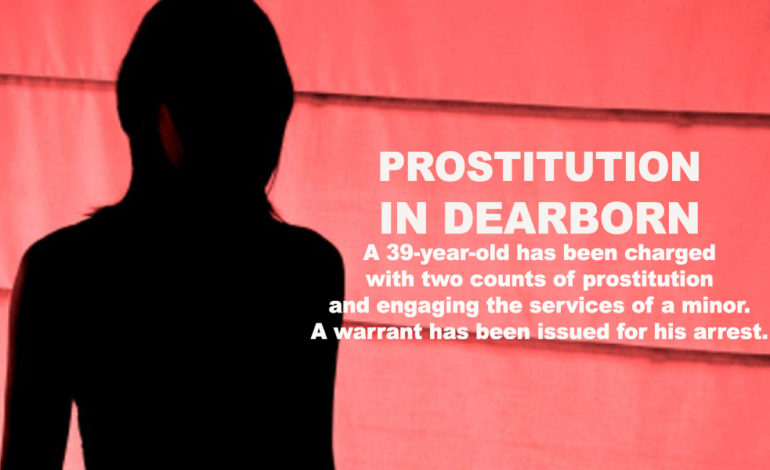 A 39-year-old has been charged with two counts of prostitution and engaging the services of a minor. A warrant has been issued for his arrest.

DEARBORN — A 39-year-old Dearborn Heights resident has been charged with two counts of prostitution and engaging the services of a minor, a 16-year-old student at a Dearborn High School, last November and December.

Omar Maher Taji was arraigned in 19th District Court on March 9 in Judge Gene Hunt’s courtroom and released on a $20,000 cash bond.

The 19th District Court confirmed to The Arab American News that Taji missed his March 22 preliminary examination. The judge rescheduled the hearing for March 27, but Taji missed his second appearance in court and a warrant was issued for his arrest. He has felony convictions in Florida for drug offenses.

The Arab American News is referring to the minor by the pseudonym “Zee A” to protect her identity and because the case is subject to an ongoing police investigation.

According to documents The Arab American News obtained from the 19th District Court, including a police report, police were first informed of the case when some of Zee’s friends told school social workers in December that she’d been bragging about engaging in sexual activity with an older man in exchange for money at the Red Roof Inn on Michigan Avenue in Dearborn.

Zee had allegedly told the girls in her school that she was giving the money she made to her older sister, “Yassey”, and Yassey’s boyfriend, Tariq Al-Abdat. She also said she wasn’t allowed to keep any of the money she received.

Zee told Dearborn Police detectives that she’d offered sex for money a month prior on the social media app Whisper, where she’d met Taji. She told them that Yassey had driven her to the motel, though she denied that Yassey knew that they were about to engage in sex for money. Tariq Al-Abdat was charged with human trafficking of a minor and human trafficking enterprise causing injury. He plead guilty to the charges and his sentence is scheduled for May 16 in Wayne County Circuit Court.

Both Yassey and Zee later confirmed to the investigators that the older sister had knowledge of the exchange and that Zee and Taji met at a later point for the purpose of having sex at Al-Abdat’s residence.

When asked about the money, Zee said she gave it to her sister. Yassey said she gave part of the money to Al-Abdat and donated $100 to a friend’s funeral service.

Dearborn police arrested Yassey for participating in the prostitution of her minor sister. She later disclosed to the investigators during an in-custody interview that she’d also been engaging in prostitution. She told police that she was recruited by Al-Abdat shortly after they’d started dating last June.

Cell phone conversations obtained by the police confirmed the cash deals made between Taji and Zee. A search warrant revealed that Taji booked a motel room at the Red Roof Inn on the day of the alleged sexual encounter.

The cell phone conversation also revealed that Yassey knew of Taji’s age. The court granted her immunity in exchange for her testimony as a witness in the case against Taji.

Tariq Al-Abdat was charged with human trafficking of a minor and human trafficking enterprise causing injury, in addition to other prostitution charges, and was arraigned on March 8. He waived the preliminary exam, which was scheduled for April 4, and plead guilty in Third Circuit Court on April 30. He is scheduled for sentencing on May 16 in front of Judge James R. Chylinski.

A representative from Dearborn Public Schools had no comment, but told The Arab American News that Zee is still a student in the school system.