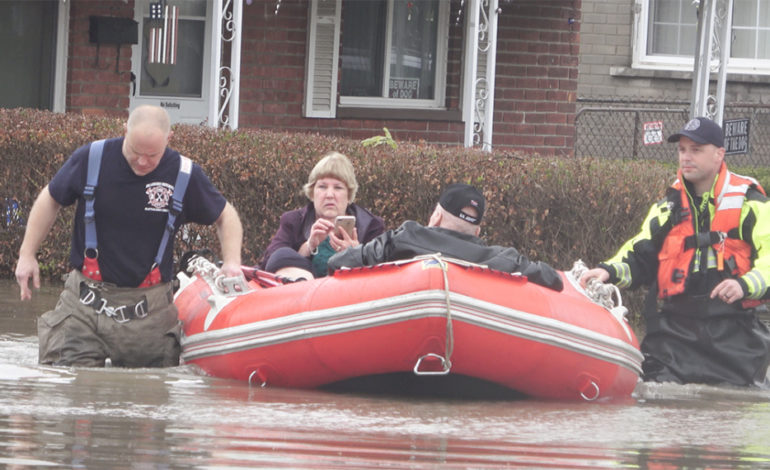 “I want to commend the first responders, volunteers and residents who have pulled together to respond to the devastation caused by the damaging rain and flood waters,” Whitmer said. “The state is committed to do all it can to speed the recovery of the affected communities in Wayne County.”

“Heavy rains this week, on top of an already wet April, have caused flooding and extensive damage in several Wayne County communities,” Evans said. “With thousands of homes flooded or damaged, we don’t have the resources locally to deal with this amount of damage and thousands of our residents are going to need help.” Dearborn Heights firefighters rescuing residents trapped in their homes by flood on Tuesday, May 1

Whitmer has made available all state resources in cooperation with local response and recovery efforts in the designated area. The declaration authorizes the Michigan State Police, Emergency Management and Homeland Security Division to coordinate state efforts above and beyond what MSP/EMHSD has already been doing in conjunction with local agencies.

According to the National Weather Service approximately 3.65 inches of rain fell in seven hours from 12:53 p.m. on Tuesday until 3:53 a.m. on Wednesday.

Some of the hardest hit areas include Allen Park, Dearborn Heights, Ecorse, the Grosse Pointes, Inkster, Lincoln Park, Romulus and Taylor. According to preliminary reports from the National Weather Service, 5.82 inches of precipitation fell at Detroit Metro Airport in April.

“There was just too much rain, in too short of time, given already elevated water levels in many bodies of water, like the Ecorse Creek,” Evans said. “Since the rainfall we’ve been working with our local partners to assess the flooding and damage, which is likely to increase, particularly if there’s more precipitation.”

“My staff has been working with Wayne County officials since the heavy rains struck the area earlier this week,” said Capt. Emmitt McGowan, deputy state director of Emergency Management and Homeland Security and commander of the MSP/EMHSD. “We will continue to partner with the county to ensure they receive the needed resources to respond and recover from this incident.”

The declaration is effective until further notice.