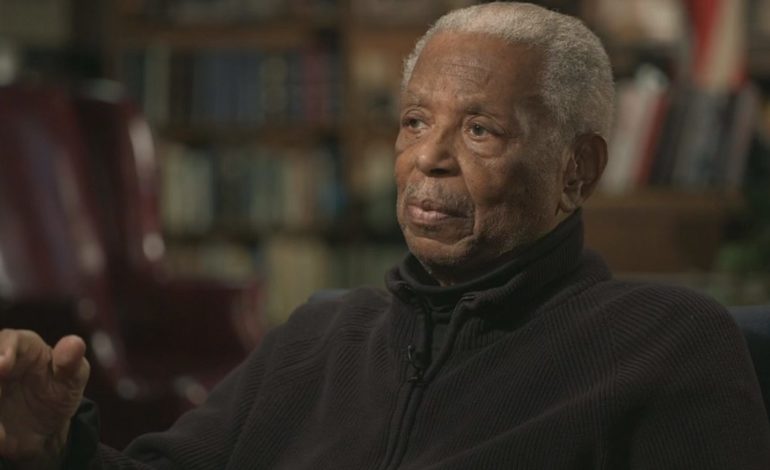 Photo via One Detroit Public TV

DETROIT — Judge Damon J. Keith, a Detroit native, one of the country’s longest-serving federal judges and a civil rights icon, died at the age of 96 on Tuesday, leaving behind a legacy of justice and equality.

Keith made a career out of landmark court decisions that helped shape the social and legal landscape of the country, becoming only the sixth African American in U.S. history to serve on the Federal Court of Appeals.

“The civil rights community has lost a giant among those who have consistently fought to hold fast to the reins of justice and equity for all people,” said Reverend Wendell Anthony, president of the Detroit branch of the NAACP and a board member of the Arab American Civil Rights League, in a statement from the ACRL. “This is particularly true in the cause of Black freedom and social justice.”

Keith, a grandson of slaves, served more than 50 years on the federal courts and was never shy about speaking truth to power. He was sued by former President Richard Nixon over a ruling against warrantless wiretaps, attacked racial segregation in education, housing and employment, as well was secret post-9/11 hearings to deport hundreds of immigrants deemed to be “suspicious.”

“Judge Keith was a brilliant and courageous jurist who devoted his life to civil rights and the promise our constitution has for all people,” said ACLU of Michigan Legal Director Michael J. Steinberg. “His passion and eloquence were unparalleled; and as a federal judge and civil rights leader he has shaped the legal, social and political landscape of our time for decades to come.”

Leaving behind a storied and one-of-a-kind legacy in the city, Keith’s name graces the front of the Damon J. Keith Center for Civil Rights at the Wayne State University Law School.

“A trailblazer and history maker, as the longest-serving Black judge in the nation, Judge Keith paved the way and inspired us all to believe in our right to have a seat at the table and a voice in the room,” said U.S. Rep. Brenda Lawrence (D-Southfield) in a statement. “The immeasurable influence of the lasting advocacy of Judge Keith is greatly appreciated and will truly be missed. My thoughts and prayers go out to the family, friends and loved-ones during this difficult time.”

Keith’s famous statement, and stand for Arabs, Muslims and due process

On August 26, 2002, in the wake of the September 11, 2001 attacks, Keith ruled against secret U.S. deportation hearings at the U.S. Appeals Court in Cincinnati, dismissing arguments advanced by Justice Department attorneys that he called “profoundly undemocratic.”

“The executive branch seeks to uproot people’s lives outside the public eye and behind a closed door,” Keith wrote as part of the 3-0 decision, declaring the blanket closure of deportation hearings for individuals targeted in terrorism investigations unconstitutional.

He later released a statement that would eventually inspire a new slogan for The Washington Post, “Democracy Dies in Darkness”, more than 15 years later.

“The First Amendment, through a free press, protects the people’s right to know that their government acts fairly, lawfully and accurately in deportation proceedings. When the government begins closing doors, it selectively controls information rightfully belonging to the people. Selective information is misinformation.”

Keith made his statement about democracy with respect to the case of Rabih Haddad, a volunteer imam from Ann Arbor, and co-founder of the Global Relief Foundation, an Islamic charity. Haddad was arrested on December 14, 2001 following the 9/11 attacks. He was deported to Lebanon in 2003, despite never having been charged with a crime, after spending 19 months in jails in Chicago and Michigan. He was deported for overstaying his tourist visa.

Keith’s stand in the name of justice and democracy against the secret trials of then-U.S. Attorney General John Ashcroft have not been forgotten.

Following his passing, state, local and national officials have spoken out in remembrance of Keith’s legacy.

“We have lost a protector of the people and I just lost another good friend,” said U.S. Rep. Debbie Dingell (D-Dearborn) in a statement. “Judge Keith was an example of the best of Michigan.”

“Judge Damon Keith was simply one of the greatest jurists of the 20th and 21st centuries,” said Wayne County Prosecutor Kym Worthy in a statement. “His impact and legacy will live on in Michigan and the United States.”

“Judge Damon Keith was a civil rights icon,” she said. “In his decades of public service, he stood up for what was right, even if it meant facing attacks and threats from others. Because of his strength, his determination and his commitment to ending racism in our country, Michigan is grateful and better for it. We should honor Judge Keith’s legacy by working together to build a Michigan where everybody, no matter who they are or where they come from, can get ahead.”

“The passing of Judge Damon Keith marks the end of an incredible life’s journey —not just for one man but for a nation that craved his leadership,” said Michigan Attorney General Dana Nessel. “For more than half a century Judge Keith ruled from the bench with compassion, integrity and justice — an example for all of us.”

The benefits of Keith’s legacy will continue to be felt for years in minority communities and other communities from all walks of life.

“We lost a giant in the civil and legal justice system,” said attorney and Wayne County Airport Authority Board Chairman Nabih Ayad. “Damon Keith was a trailblazer for many, not only for African Americans but for Arab Americans and for challenging government intrusion from wiretapping.

“We are all very thankful, even as Arabs and Muslims, for him standing up for not only African Americans but all Americans’ rights.”